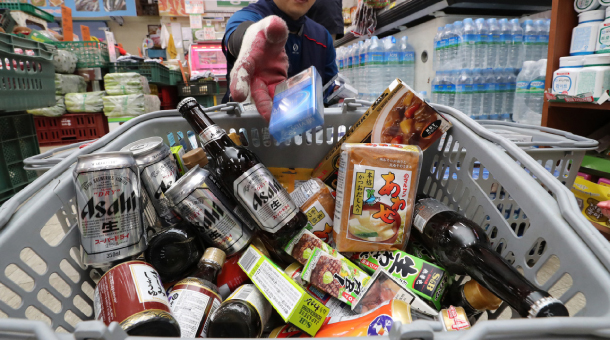 A supermarket employee in Seoul takes Japanese products off its shelves in response to a growing campaign to boycott Japanese goods in protest of the recently implemented export restriction by the Japanese government. [YONHAP]

Samsung Group heir Lee Jae-yong and Lotte Group Chairman Shin Dong-bin were supposed to attend the meeting but both are currently in Japan.

Samsung is expected to be most heavily affected by Japan’s new restrictions on exports of key materials for making semiconductors and displays, seen as a protest of Korean Supreme Court rulings ordering Japanese companies to compensate Korean forced laborers during the colonial period.

Lotte is also said to be on edge as the retail conglomerate has been increasing its investments in petrochemical businesses, which are heavily dependent on Japanese intermediate products.

The meeting was said to be arranged by Blue House policy chief Kim, who until recently headed Korea’s Fair Trade Commission.

The meeting on Sunday will help Moon prepare for his meeting with the heads of 30 leading Korean businesses on Wednesday to discuss the Japanese retaliations as well as government measures to support Korean exports.

Until now, Moon has been silent on the issue, even after Japan announced it would restrict exports of three key materials to Korea on July 1.

On July 2, the issue was reported not to have been raised during a cabinet meeting.

Minister of Trade, Industry and Energy Sung Yun-mo - after meeting with Finance Minister Hong - announced Monday that Korea will raise the issue with the World Trade Organization (WTO).

Last Thursday, the Blue House’s National Security Council called the Japanese action a “political retaliation.” It toned that language down in less than 30 minutes, describing “an export restriction with a retaliatory nature.”

Some in the business community are already expressing skepticism over the government’s response.

“The situation is urgent for both businesses and the government,” said a corporate official, who asked not to be named. “But I wonder what’s the point of trying to find a solution [so late]?”

“The government claimed that they have been predicting the Japanese government would enforce retaliatory export restrictions,” the official added. “But nobody knows what kind of measures the Korean government expected [until now].”