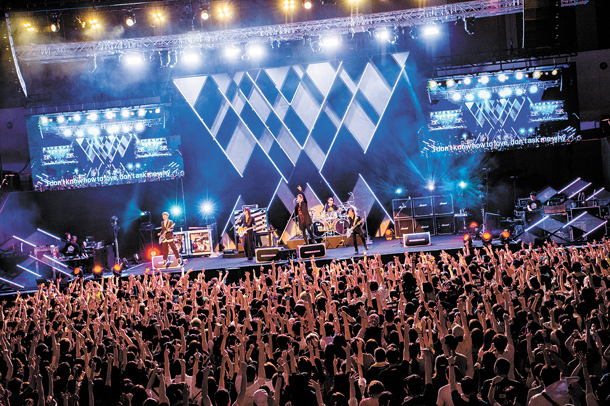 In celebration of their 25th anniversary, popular Japanese rock band GLAY performed their first concert in Korea on June 29 and 30 to thousands of enthusiastic fans.

GLAY’s 48-year-old leader and guitarist Takuro, who composes and writes most of the band’s songs, told the JoongAng Ilbo in an interview Sunday, “I was shocked that there was an even [more excited] response than from our Japanese fans. We regret not coming sooner.”

Over Saturday and Sunday, the “GLAY 25th Anniversary Special Live in Seoul” drew a crowd of some 4,000 fans filling out the KBS Arena Hall in Gangseo District, western Seoul.

GLAY formed in Hokkaido as a high school indie band in 1988, and the band officially debuted in 1994 with their EP “Rain.” The band over the past quarter century has released hit after hit.

During the concert, the band performed their recent hits like “Just Fine” along with popular songs from the 1990s like “Yuuwaku (Temptation),” “Winter Again” and “However.”

The following are edited excerpts from the interview with Takuro.

Q. How did you feel meeting your Korean fans?

A. I was surprised at how enthusiastic the Korean fans were, singing along with their whole body to even ballad songs that the Japanese audience usually just listens to quietly. Seeing video clips of the performance, the venue was shaking [so much] that even the camera shook! The exchange of heated feelings transcends the barrier of language. I thought that we should go to places we haven’t visited yet if they call us.

What has kept the band going for 25 years?

It’s probably because we are a group of friends that grew up in Hakodate, a rural town in Hokkaido, and have mutual understanding. Teru and I have been friends since we were 12 years old. Sometimes we fight because of differences in opinions, but then we resolve it quickly over drinks, talking about the past. We always talk about how even if we were not doing music, we might be making movies or writing books together. It is joyful to be together, and we were able to be together so long because we respect each other.

GLAY’s 25th anniversary concert tour and album is called “Democracy.” Why is that?

All our activities are discussed and decided on by all our members. If there is a member who takes longer for some reason, we aren’t impatient, nor do we reprimand him. We support them. A staff member of ours said “GLAY is democratic,” which is why we came up with that name.

You play a very expensive vintage guitar - what is the story behind it?

Years ago, I bought a 1959 Les Paul Standard from the United States for 300 million won ($255,300). With that money, I can probably build a castle in my hometown of Hakodate. (Laughter). Because I am busy as the band’s leader, I have left guitarist duties to Hisashi, but I myself wanted to contribute to the band as a guitarist and [got interested in] the world of vintage guitars. It’s a guitar that’s older than me and permeates the sweat and tears of guitarists over many years, giving me courage and confidence. I performed with this guitar during the Korea concert. When I see the audience as they hear the sound of the guitar, I feel its charm.

Is there a Korean musician you want to collaborate with?

In the past, we worked with JYJ’s Kim Jun-su and Kim Jae-joong. Teru also wrote the Japanese debut song for Pentagon, and listening to that song, I thought we are compatible with Korean musicians. This time around, I’d like to write a song for Pentagon.