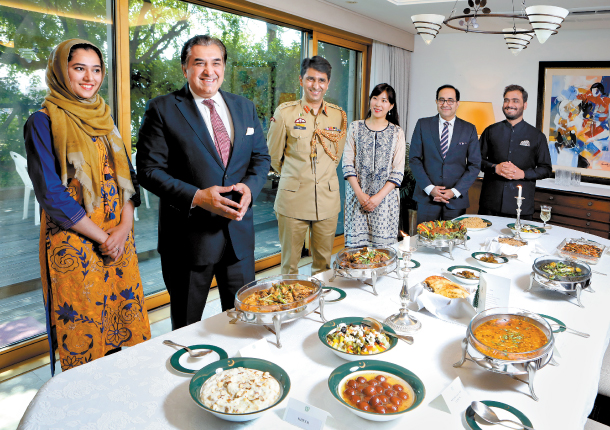 It may be that one of the first Pakistanis to set foot in Korea did more than he had intended to do for the world of Buddhism in the country.

“Dating back to A.D. 384 monk Maranatha brought Buddhism to the ancient kingdom of Baekje from Swabi in Pakistan, traveling across China and arriving at Beopseong Port, Yeonggwang County, South Jeolla, in the Baekje Kingdom,” said Pakistan Ambassador to Korea Rahim Hayat Qureshi. “Korean historical texts - like ‘Samguk Yusa’ by Iryeon (1281), ‘Samguk Sagi’ by Kim Busik (1145) and ‘Haedong Goseungjeon’ by Gakhun (1215) - mention this part of the bilateral history.”

Tracing the footsteps of Buddhism from Pakistan to Korea in Gyeongju will be one of the summer missions of Ambassador Qureshi, who was appointed to Korea in July 2017.

“It is interesting to note that the Unesco World Heritage-listed Seokguram Grotto, part of Bulguk Temple in Gyeongju, North Gyeongsang, is thought to have been inspired by Gandharan art,” he said.

Gandhara is an ancient state and center of Gandharan Buddhism, which is estimated to have straddled an area of today’s Pakistan and Afghanistan.

“The Korean National Treasure No. 83, ‘Maitreya in Meditation,’ is thought to have been based on Gandharan images,” the top envoy added.

The link of Buddhism between the two countries is one of the reasons the ambassador was appointed.

“Korea is my first ambassadorial posting, and I chose it over other stations for a number of reasons,” he said. “First is that I wanted to know more and personally experience the unique cultural linkage that exists between both countries through Buddhism. I was also fascinated by the history of Korea and the way it achieved remarkable success in a short span of time.”

Ambassador Qureshi and his colleagues at the embassy spoke with the Korea JoongAng Daily on June 25 at his residence about culture, religion and ways of life that transcend geographical boundaries between Pakistan and Korea. 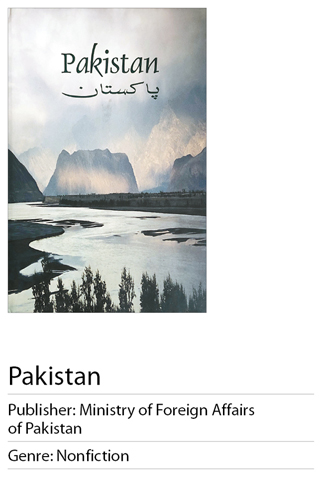 Detailed with breathtaking pictures of Pakistani landscapes, including the snow-dusted ranges of K2, plains by the Indus River Valley and the sand dunes of Thar Desert, as well as those depicting lifestyles, traditions and arts of the people of Pakistan, the book written by the Ministry of Foreign Affairs provides a glimpse into life in Pakistan for outsiders.

Q. A large section of the book you recommend to readers who wish to learn more about Pakistan introduces its natural landscape, which ranges from the Indus River plain to snow-dusted mountains, including K2.

A. Landscape is much more than scenery to be observed or even terrain to be traveled, as this fascinating and many-layered book vividly shows the reader. It is also a pictorial overview of Pakistan’s culture, its people and important monuments, which makes this book interesting. It is for someone who has never visited Pakistan and who, after going through this book, feels the urge to visit Pakistan once in their lifetime to experience its utmost beauty.

How can one best prepare for a trip to the wilderness of Pakistan?

Pakistan is a land of diversity with all kinds of landforms ranging from deserts to mountains. Tourists interested in trekking or mountaineering can visit the northern areas of Pakistan that is home to Karakoram and K2, the second-highest mountain in the world. For an exciting historical architecture experience, we recommend visiting old Lahore, which is not only famous for its architecture but also [has] exquisite Pakistani cuisine.

As far as practical preparations are concerned, if you would like to visit northern areas, you need to be physically fit to hike.

Is there a route you recommend?

Pakistan offers a unique mix. Its attractions include adventure tourism in the northern areas; cultural and archaeological tourism in Taxila and Swat; and early Muslim and Mughal heritage of Multan and Peshawar.

Pakistan is divided into four provinces. As the flights from Korea usually land at the Lahore, Islamabad or Karachi airports, the starting point can be either of these cities. I would recommend Karachi as it is the southern part of the country from which the 1046-kilometer [650-mile] long coastline with the Arabian Sea can also be seen.

The book also mentions Muhammad Iqbal. How is he regarded by many Pakistanis? Tell us about the Pakistan Movement and its significance for the people of Pakistan today.

Allama Muhammad Iqbal was a God-gifted Persian and Urdu poet, Islamic scholar, philosopher and socio-political activist, whose poetry is considered to be among the greatest of the modern era. His vision of an independent state for the Muslims of British India later inspired the creation of Pakistan. He is officially recognized as Pakistan’s national poet and his birthday is a national holiday in Pakistan.

Do you have any recommendations for readers on Urdu poetry?

Urdu, literally meaning “camp” in Turkish, is a mixture of many tongues and languages. Muslims brought many different languages to South Asia, and enriched South Asian languages with words from their own. The 18th century saw a phenomenal rise in Urdu poetry when Urdu replaced Persian as the lingua franca of the region.

There are certain very famous poets in Urdu poetry, for example Allama Iqbal, Mirza Ghalib and Faiz Ahmed Faiz who infused Urdu expressions and words seamlessly into lyrics, ghazals and shayaris, making them not only easier to understand but also fall in love with the language.

Despite the political differences, the people of North and South Korea share their cultures in food, tradition and languages. What are some of the cultures shared closely between the people of Pakistan and South Asia?

By the time of partition in 1947, the two sides had lived together in one society for more than a millennium. South Asian Hindus and Muslims share not just a cultural gene pool and biological ties, but common kinship institutions.

Despite all the political differences, the citizens of both sides remain strongly interrelated and interconnected with one another through the similarities in culture, language, dress, festivities and traditions that are bonding them together despite the disputes between the two sides.

People of Pakistan want to live in harmony with the people of South Asia, yet resolution of certain outstanding disputes are necessary for peace.

Partition is irrelevant in poetry. Urdu speakers on both sides of the border love the same poetry and venerate the same poets. For example, Mirza Ghalib - one of the greatest poets - is said to belong to everyone.

The Cricket World Cup is ongoing at the moment. Would you say the game of cricket is more than a sport for the people of Pakistan?

After the India and Pakistan division in 1947, the people of Pakistan established their own nation and started encouraging the game of cricket in the early stages of development. Pakistan’s cricket team appeared for the first time in 1952 in a test match.

The great thing about cricket is how well it has united the nations who have embraced the game. Pakistan is one of the countries where cricket has helped to unite the country. It is played in most areas of Pakistan.

Pakistan won the Cricket World Cup in 1992 and the ICC T20 World Cup in 2009. In 1992, the current prime minister was the captain of the Pakistani team that led Pakistan to a historic win.

What about the dishes prepared today are characteristically Pakistan?

All the ingredients including spices used in the dishes are Pakistani and cooked in traditional Pakistani style. These dishes are usually prepared for special occasions like Eid, weddings or other special events. Yet naan [a round flat leavened bread] or roti [soft flat unleavened bread], matar pulao [a rice and pea-based dish] and beef kebab are also a part of daily menus cooked at homes for lunch or dinner.

How much does Pakistani gastronomy vary from region to region? What are some major regional characteristics?

Pakistan is not just diverse with respect to its culture and languages but also [in terms of] food. Each region has its own unique style of cooking and ingredients used. For example the characteristic ingredient of northern areas’ cuisine is meat, whereas in plains like Punjab and Sindh vegetables are mostly used.

What are the latest updates and highlights on relations with Korea?

Pakistan is working toward increasing Buddhist tourism from various Buddhist countries, particularly Korea because of the historical cultural relationship between the two countries. We are working on the visit of the chief monk of the Jogye Order to Pakistan this year along with his entourage. It would be an honor for Pakistan to host the chief monk and the Buddhist delegation from Korea. Monk Hyaecho was the first monk to have visited Pakistan for pilgrimage, so the visit of most Venerable Won Haeng would be as iconic as monk Hyaecho’s. If materialized, this would also open up the Buddhist tourism doors between the two countries for years to come. 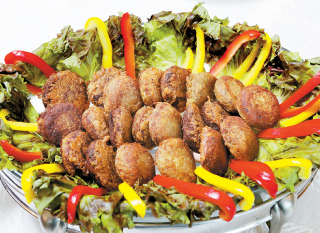 1. Place in a pot 700 grams of minced beef, 200 grams of split chickpeas (soaked), one medium onion, 15 grams of ginger, five garlic cloves, eight whole red chilies, a few pinches of salt, one tablespoon of cumin, one tablespoon of coriander powder, one tablespoon of whole black pepper, five of cloves, two of black cardamom, one teaspoon of cinnamon powder and three cups of water. Cook for 30 to 35 minutes.
2. Drain the pot and grind the cooked ingredients. Then add four to five green chilies, one chopped medium onion, 10 grams of green coriander and one egg - mix well.
3. Shape the mixture into small, rounded kebabs.
4. In a bowl, whisk one egg.
5. Add some cooking oil to a pan and place over heat. Dip the kebabs in the egg and shallow fry them.
6. Serve while still hot. 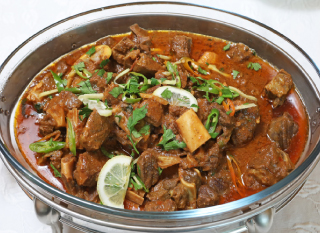 1. Place in a pan 600 grams lamb fillet, trimmed and cubed, five garlic cloves, one tablespoon of grated ginger and one teaspoon of salt and cook on the lowest heat setting for 30 to 50 minutes or until the meat is tender and has soaked in all the flavors. Stir occasionally.
2. In a karahi or wok, heat two tablespoons of butter, add three fresh tomatoes, finely chopped, as well as one teaspoon of turmeric and fry to create a thick masala paste.
3. Add two chilies, chopped, three teaspoons of crushed cumin seeds, three teaspoons of crushed coriander seeds, one teaspoon of red chili powder and fry for a few minutes.
4. Stir the cooked lamb into the karahi or wok. Add one onion, sliced, and two whole chilies, halved.
5. Sprinkle in one teaspoon of garam masala and a handful of coriander, chopped, to serve. 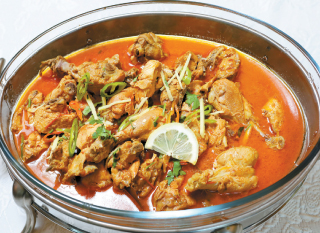 1. Blend two large onions in a food processor. Heat two tablespoons of oil in a pan and saute the onion. Stir in one teaspoon of salt. Cook for 10 minutes or until slightly brown.
2. Blend 3 centimeters (1.1 inches) of fresh ginger, three garlic cloves and one green chilly. Stir them into the sauteed onion.
3. Add 200 grams of pureed tinned tomatoes and increase the heat until the tomatoes start to simmer.
4. Reduce the heat and add half teaspoon of turmeric powder, half teaspoon of chili powder and one teaspoon of garam masala powder. Cook until the masala becomes paste-like.
5. Add 400 grams of chicken thigh fillets, chopped. Stir for a few minutes. Reduce the heat to the lowest setting and put the lid on. Cook for about 15 to 20 minutes. Sprinkle in a large pinch of coriander, chopped.
6. Serve with plain rice or roti.