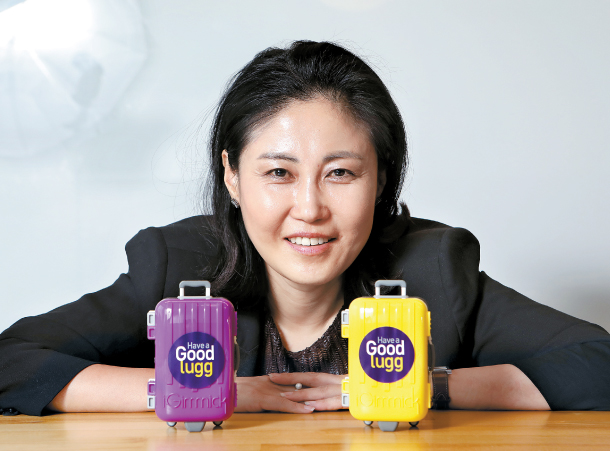 Yun So-hee, CEO and founder of luggage delivery and storage service provider Goodlugg, says its business requires a lot of capital for a start-up to handle, but sees potential in the market as a growing number of Koreans are traveling. [PARK SANG-MOON]

For luggage delivery and storage start-up Goodlugg, BTS’s concerts at Wembley Stadium in London last month were a game changer.

Ever since those shows at the start of June, Goodlugg has seen its number of users double and its customer base get broader.

“Before the concert, our service was primarily used by young, avid travelers who got to know about our business through online travel communities,” said Goodlugg CEO and founder Yun So-hee. “But we now receive inquiries from older people too.”

The start-up launched last August, but only started receiving attention after the BTS concert, where Korean ARMY took advantage of its services to store their bags because large bags were not allowed to be taken into the stadium.

Despite the time difference between Seoul and London, Goodlugg’s 24-hour customer service team helped store the bags of struggling BTS fans at its nearby storage sites. It provided its services free of charge as fans struggled to make online payments while traveling.

“Giving out free coupons when they are desperately needed seems like a better way to promote the brand than spending large amounts on advertisements,” said Yun. “People seem to be moved more deeply when they receive help abroad.”

Like most start-ups, Goodlugg has big plans for the future. For now at least, it believes that its current service can become attractive enough to even appeal to foreign users.

“If you are able to satisfy Korean customers, you can satisfy anyone,” said Yun.

To learn more about the business, Yun met with the Korea JoongAng Daily for an interview in central Seoul on Wednesday.

The following are the edited excerpts.

Q. How did you get the idea for the service?

A. I got the idea for Goodlugg while running EMC, a marketing consulting firm with domestic card companies as its main clients.

Card companies suggested ideas about services they believed could be useful to their customers, and luggage delivery was one of them. Thanks to that relationship, Goodlugg has Shinhan Card and Visa as partners. They sell our services on their mobile apps at a discounted price. We recently partnered with Hyundai Card [as well].

A growing number of people are flying via low cost carriers, which often have inconvenient arrival schedules like landing in the middle of a night. For travelers who are forced to waste a day or two due to the inconvenient schedule, helping them with their luggage could provide them with more mobility and a convenient travel experience.

Providing a delivery and storage service to travelers in foreign countries sounds like it requires a significant investment. Was it a lot for a start-up to handle?

Yes. Although we are a start-up, this business requires significant funds. Our partnership with card companies thankfully helped a lot and we are now receiving investment offers from big companies. Still, the luggage service requires a lot of capital.

For airport to hotel deliveries, we have to sign a partnership with local delivery companies with a rental desk at the airport or sign up for a rental desk ourselves, which costs up to 20 million won ($18,000) per month. Partnering with hotels, especially fancy hotels, is also challenging. Following requests from Airbnb users, we have expanded our delivery service to designated spots in cities.

For the storage service, we partner with local shops, stores or hotels. But problems have occurred when cultural differences between quick-tempered Koreans and [cultures that are more] laid-back clash. Some shop runners opened their stores later than they said they would. Having to wait a few extra minutes frustrated some of our users. This is understandable because travelers are often on a tight schedule, and have to rush to catch a train.

What are the major factors you consider in running Goodlugg?

Customer service and low prices are two important factors we consider while running Goodlugg. The company hasn’t invested in advertising since launching, but we were able to build loyal customers who voluntarily promoted our business to others.

Providing good customer service is especially important for our business because travelers face lots of variables abroad like low internet speeds and an unfamiliar environment, often making them feel more frustrated when things don’t go according to plan. Offering lower prices is essential because there are lots of travel apps that compare service prices from different companies.

Are there any other services you plan to launch through Goodlugg?

Goodlugg hopes to expand its partnership with companies in various sectors, including budget carriers and mobility companies. For instance, we partnered with ride-hailing app Grab to offer our customers a discounted price for Grab services in six countries, including Thailand, Malaysia and Singapore. Also, we are considering selling coupons for overweight baggage charges in affiliation with budget carriers.

We also plan to expand our service to people from other countries across Asia. Our primary goal for now is to cover the Asian market because it is a big market with lots of opportunities.

As for the European and U.S. markets, we already have partners: Stasher and Bags VIP. They were reluctant to work with a small Korean firm like us at first, but have recognized the growing importance of the Korean market and want to expand their business into the Asian market by working with Goodlugg.