Dancer’s retrospective gets people up and moving: Eun-me Ahn looks back at 30-year career with museum exhibit

Dancer’s retrospective gets people up and moving: Eun-me Ahn looks back at 30-year career with museum exhibit

Contemporary dancer and choreographer Eun-me Ahn performs during the opening ceremony of her retrospective exhibit “Known Future” that is being held at the Seoul Museum of Art in central Seoul. [SEMA]

When a choreographer wants to celebrate their 30-year career, they usually select a theater that has special meaning to them as the venue to stage the retrospective work.

But contemporary dancer and choreographer Eun-me Ahn didn’t want to do something average for the 30th anniversary of her Ahn Eun-me Dance Company. That’s why she chose an art museum, a rare venue for a dancer to present their works. After knocking on the doors of some museums and galleries, she finally received a nod from the Seoul Museum of Art in central Seoul. Known as Korea’s oddball dancer, Ahn will showcase her works from the past 30 years until Sept. 29 in an exhibition titled “Known Future.”

“I didn’t want to go into a theater to present my works from the past 30 years,” said Ahn, during a press conference for the exhibition held at the museum last week. “If I perform in a theater like everyone else, it would make me feel like I’m not evolving. I wanted to summarize my career refreshingly, and that’s when I thought about holding an exhibition.

“Plus, you can hold an exhibition for three months straight,” she added. “I don’t know if it’s even possible but if I perform for three months, I would be hospitalized.” 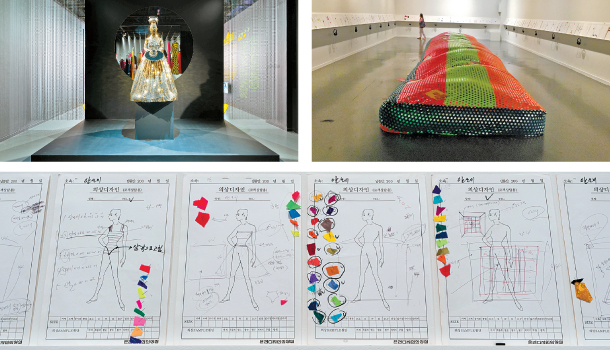 Above left: Ahn’s costumes are displayed at the beginning of the exhibition. Above right: A large beanbag made of fluorescent fabric - a color Ahn is known for - has been installed. Ahn says visitors will have to “use their whole body to get out of the chair.” At right are some of Ahn’s costume sketches. [SEMA]

Known for her shaven head and colorful clothing adorned with extraordinary jewelry, Ahn established her company in 1998. Since then, she’s been collaborating with artists in different fields including painting, installation, visual arts, sound and stage design to create contemporary works. That’s what, Ahn explained, makes her retrospective exhibition more interesting.

“I’ve been documenting all those collaborative works,” she said, “but the exhibition isn’t merely an archiving of my works. Visitors will have no choice but to participate and interact with the work. They’ll have to ‘dance’ to move around some of the installations and they’ll also get to watch me rehearse on the stage that’s been set up inside the exhibition hall.”

The exhibit is divided into three parts. As soon as visitors enter the exhibition hall, Ahn’s colorful costumes are hanging from the ceiling, signaling the start of “Ahn’s Dances and its Records.”

On the floor, hundreds of transparent balls are scattered around, requiring visitors to constantly move their feet and kick the balls to ensure they don’t trip. Photographs of Ahn are inside each ball.

A large painting on the wall depicts Ahn’s life in her 20s, 30s, 40s, in the present and even in the future. The painting was created by artist Rhaomi, who has frequently collaborated with Ahn.

The second section is full of installations that have been recreated by artists using objects that have been used at Ahn’s dance performances across the globe. This section is also where a stage has been set up. Ahn and her company will be coming into the museum every day during the exhibition to rehearse a piece that will premiere in the fall.

“People don’t usually approach me first, although I’m a very friendly person,” said Ahn. “They are quite intimidated by me, maybe because I dress weird and don’t have hair.”

“But when they get to know me, they’ll understand that I’m a very friendly person,” she added. “It’s actually the company’s first time opening our rehearsal process like this. Those who come to the museum every day will in fact be able to see how our works are created. Commuting to the museum for three entire months initially had me worried, but I think it’ll be an interesting process for me, my company and the visitors to the museum.”

According to Jeon So-rok, who curated the exhibition, “Known Future” will be an opportunity for visitors to really get to know Ahn, a leading figure in contemporary Korean dance.

“At first, the museum and Ahn envisioned the exhibition as having more visual artworks, but we couldn’t make that happen because of the limited budget,” she said. “So we ended up with what we have now - having Ahn Eun-me on stage every day during the exhibition. You can’t put a price on this because it’s not easy for most people to meet her, see her rehearse or even talk to her. I think we got to show our visitors a lot more than we have initially planned.”

The final section displays sketches of Ahn’s costumes, which she personally designed along with audio files of the music that was used in her performances composed by Jang Young-gyu, her long time collaborator.

In the middle of this section, there’s also a large fluorescent colored beanbag that visitors can sit on.

“To get off this bean bag,” Ahn said, “you need to move your entire body as well. It’s not that easy.”

Ahn says that dance, for her, is the “water of life.”

“It keeps me going and it keeps me alive,” she said, “and I don’t know how, but this communication through movement I’ll be having with many people for three months may change their lives. I want to give dance back to their lives and back to society.”

In total, there are 19 artworks and one performance work that visitors can enjoy at the exhibition. Every Saturday, there will also be a talk on humanities. Ahn will also hold dance classes that visitors can also participate in during the exhibition, ranging from individual lessons to group classes. Anyone interested can apply online via museum’s website at sema.seoul.go.kr.

Ahn’s “Known Future,” which kicked off on June 26 will run through Sept. 29 on the first floor of the Seoul Museum of Art in central Seoul. Admission is free. The museum is open from 10 a.m. to 8 p.m. and closes at 7 p.m. on weekends. The museum is closed on Mondays.