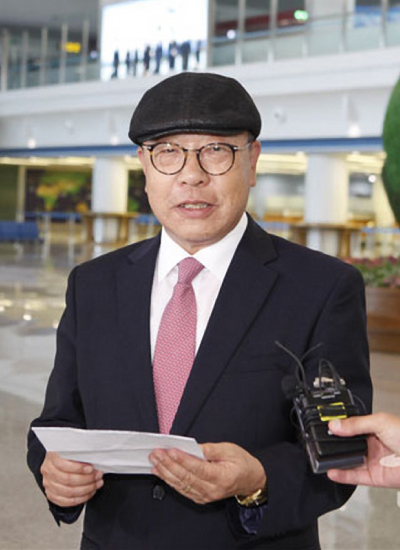 The son of the highest ranking South Korean defector to the North will be settling there, state media reported Sunday.

Choe In-guk, 73, the second son of former South Korean Foreign Minister Choe Deok-sin, landed at Pyongyang’s international airport on Saturday, and announced he would live in the North for good.

“I have belatedly decided to reside in the Republic [North Korea] because it is the duty of a child to honor the last wishes of one’s deceased parents by following the grateful fatherland that has nestled our family for generations,” Choe told the propaganda outlet Uriminzokkiri.

“I have already surpassed the age of seventy, but as per the deep wishes of my parents (…) I will spend the rest of my life upholding the command of Chairman Kim Jong-un towards the unification of the fatherland.”

Choe’s parents, Choe Deok-sin and Ryu Mi-yong, defected to North Korea in 1986. The elder Choe is the highest ranking South Korean former official to defect to the North since the 1950-53 Korean War.

The story of three generations of the Choe family is a controversial one, steeped in the ideological conflict that has dominated Korea’s modern history.

As an officer of the Korean Liberation Army, the armed forces of Korea’s government-in-exile under Japanese rule, Choe Deok-sin was one of a handful of South Koreans with any military experience who served in the Korean War.

His own father, Choe Dong-o, served as a high ranking legal official in Korea’s provisional government and operated an academy to train military officials in Manchuria. The North’s founding leader, Kim Il Sung, is believed to have trained at this academy for around six months, and this connection led Choe Dong-o to defect to the North once the war broke out.

Despite this, Choe Deok-sin continued to lead Southern troops on the front lines of the war, tasked to eliminate North Korean-aligned guerrillas in the mountains straddling the South’s Jeolla and Gyeongsang provinces. During this campaign, he commanded the unit of the South Korean Army responsible for the massacre of over 700 unarmed civilians in Geochang, South Gyeongsang - one of the most controversial atrocities of the war.

Choe Deok-sin also served as head of the Korea Military Academy from 1948 to 1949, during which he trained Park Chung Hee, the major general who led the military coup in 1961 that topped South Korea’s civilian government. Choe wholeheartedly welcomed Park’s seizure of power and was subsequently appointed his foreign minister, a post that he held until 1963. After this, Choe became ambassador to West Germany until 1967.

His relationship with the Park junta, however, deteriorated in the 1970s, and in retirement, Choe Deok-sin immigrated with his wife to the United States in 1976, leaving behind two sons and three daughters in the South. Serving as a leader of Cheondoism - a Korean nativist religion with adherents in both Koreas - Choe slowly began to speak out against the Park regime, until he made a bombshell announcement in 1986 that he would defect to the North.

He was received with open arms in Pyongyang. His wife, Ryu Mi-yong, served as chairwoman of the central committee of the North’s Chondoist Chongu Party.

While Choe Deok-sin was celebrated in the North until he died in 1989, his children in the South were subject to surveillance by authorities and reduced to poverty. Choe In-guk told the South’s media of his disgruntlement with his parents’ decision, but he nonetheless took part in the two Koreas’ divided family reunions in August 2000, when he met his mother for the first time in over two decades.

Ryu died in November 2016, and Choe In-guk was granted permission by Seoul to attend her funeral in Pyongyang.