Trekking along the DMZ to give peace a chance

Trekking along the DMZ to give peace a chance 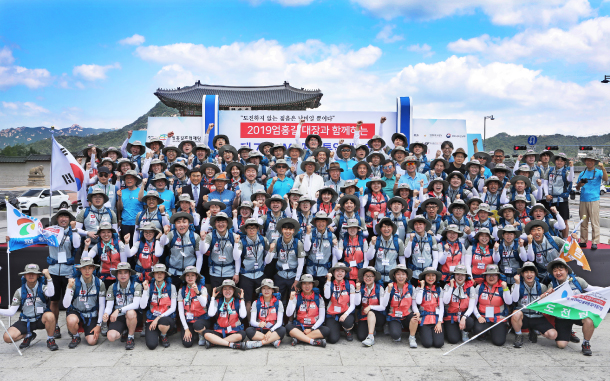 Ninety college students from across the country gather in Gwanghwamun Square, central Seoul, on Sunday to kick off the 7th DMZ Peace March, a 15-day trek along the inter-Korean border. This year’s event is co-hosted by the Um Hong Gil Human Foundation and the Korea JoongAng Daily. [PARK SANG-MOON]

Halfway through his junior year at Eulji University in Daejeon, Kim Su-chan, a nursing major, thought he needed a morale boost. Nursing training was getting intense and the 25-year-old was losing motivation to continue on. A gruesomely painstaking, sweaty challenge might get his school life back on track, he assumed. 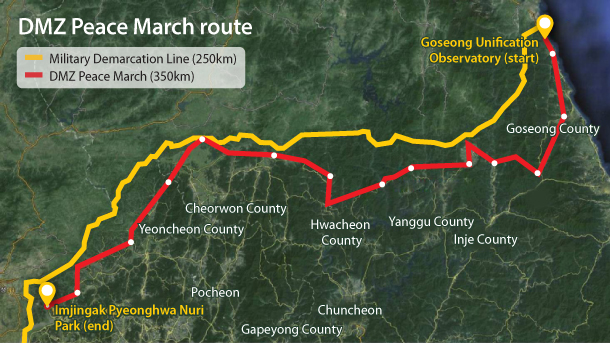 So did 89 other college students who gathered in Gwanghwamun Square, central Seoul on Sunday to begin a 15-day journey on foot from the east side of the country to the west.

Trekking programs, or “a long walk across the country” as they call it in Korea, are popular among college students on summer breaks, who walk hundreds of miles and sleep in tents to break out of their comfort zones and toughen themselves up for adulthood.

But Kim and his group will be walking along the demilitarized zone (DMZ), which, despite its name, is one of the most heavily militarized borders in the world. The person leading Kim’s group will be Korea’s most renowned mountaineer, Um Hong-gil, who in 2007, became the first person to climb the 16 highest peaks in the Himalayas.

Ninety university students selected from nearly 200 applicants will join Um in the so-called DMZ Peace March. They will walk a total of 350 kilometers (217 miles) from Goseong County, Gangwon, to Imjingak in Paju, Gyeonggi. After the launch ceremony in Gwanghwamun Square on Sunday, the group took a bus to Goseong to start their march. It is scheduled to arrive in Imjingak on July 20.

Um, who founded the Um Hong Gil Human Foundation in 2008 and kicked off the annual DMZ Peace March in 2013, hopes the program will help Korea’s youth take on new challenges and gain a better understanding of the divided peninsula. This year’s event is co-hosted by the foundation and the Korea JoongAng Daily. 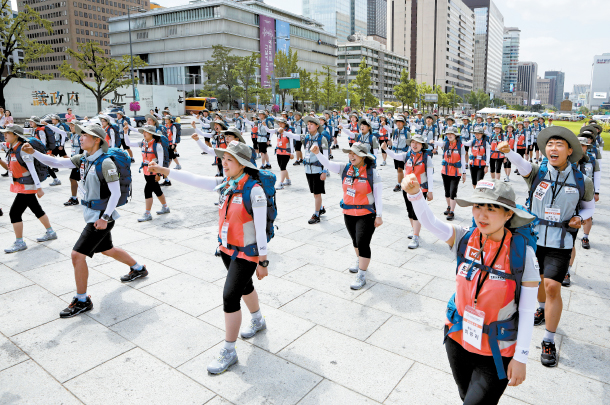 Ninety university students from across the country gather in Gwanghwamun Square, central Seoul, on Sunday to attend a ceremony kicking off the 15-day DMZ Peace March. The group will walk 350 kilometers (217 miles) along the inter-Korean border through July 20 in a mission to promote peaceful reunification and gain self-confidence. [PARK SANG-MOON] 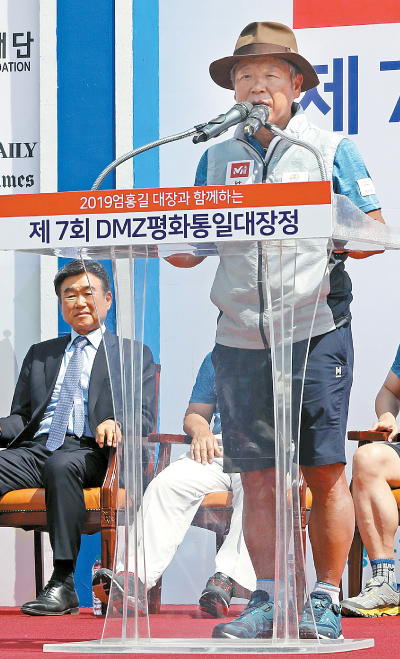 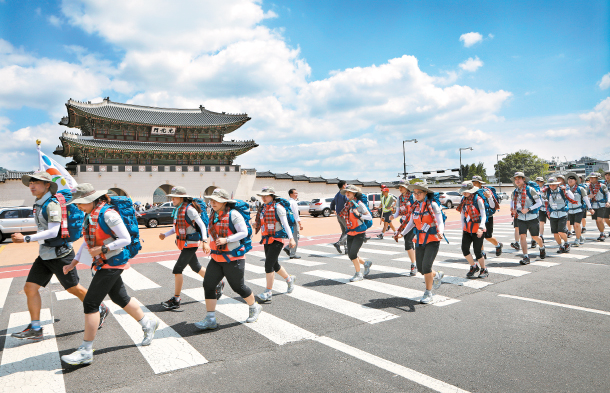 Members of the DMZ Peace March walk in front of Gwanghwamun Gate after the ceremony to take a bus to Goseong County, Gangwon, to begin their journey. [PARK SANG-MOON]

“The leaders of South Korea, North Korea and the United States met a week ago in Panmunjom and the push for peace is running stronger,” said Um on Sunday as he and the 90 students were about to leave for Goseong.

“The DMZ march is about young people winning their inner battles,” he said, “and yearning for a peaceful reunification process.”

Kim Geu-rim, 26, a public administration senior at Kyonggi University in Suwon, Gyeonggi, said she was inspired to sign up for the program after watching a documentary on such trekking programs for college students.

“I thought it’d be impossible to walk 300 kilometers [186 miles],” said Kim. “But in the documentary, students were shown helping each other out, and I realized I could possibly make it with such teamwork.”

Kim said she hopes to gain confidence from the experience as she prepares to find a job in Korea’s tough job market.

“I’ve started to look for a job but the whole process has gotten me down lately,” she said. “I hope after marching 350 kilometers, I can believe in my dream of working in a football club and fulfill it.”

As for Kim Su-chan, the nursing major, he said he hopes the march helps him conquer whatever fear he confronts in the future.

“When that moment comes,” he said, “I want to look back at the DMZ march and think to myself, ‘Hey, I completed that. There’s no way I can’t accomplish this.’”