Wealthy Koreans are heading out

Wealthy Koreans are heading out

Wealthy Koreans are migrating in increasing numbers to other countries because of the unstable economy and high tax rates at home.

Countries like the United States and Singapore are especially popular as immigration destinations because of their stable economies, lower tax rates and good education. 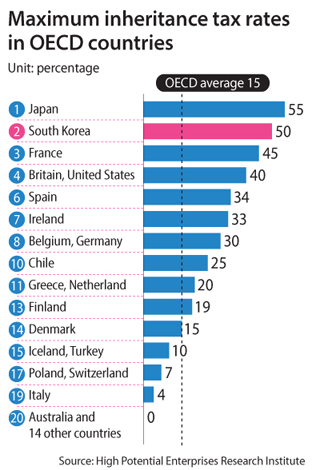 A wide range of people, from families with children to people in their 70s, were paying close attention to a seminar on investor immigration visas for the United States at the JW Marriott in Seocho District, southern Seoul, on June 15.

The attendees had their eyes on the Immigrant Investor Program, where people would invest around $500,000 to create jobs in the United States and receive an EB-5 visa in return. To qualify for the visa, people will need to make an investment in a commercial enterprise in the United States and plan to create or preserve 10 permanent full-time jobs for qualified U.S. workers.

The U.S. Citizenship and Immigration Services administer the EB-5 Program. When issued an EB-5 visa through the program, entrepreneurs, their spouses as well as unmarried children under 21 are eligible to apply for a green card, which grants them permanent residence in the United States.

The number of Koreans issued an EB-5 visa in 2018 was 531, according to the U.S. Department of State. That is an increase of 336 people compared to 2017. Korea is in fourth place, following China, Vietnam and India, by the number of people receiving visas through the Immigrant Investor Program.

“I got interested in immigrating even though I’m not going to leave [Korea] right now,” said a businessman in his 70s. “This is due to the economy in Korea being unstable and the amount of tax we have to pay rising.”

There were five of these sessions across Seoul last Saturday on United States investor visas.

“The number of wealthy people who are considering immigration because of [Korea’s] high tax rates is increasing,” said Park Seung-an, a team leader of Woori Bank’s center in Gangnam, southern Seoul. “In the case of people with a substantial amount of assets, their children are studying or working abroad, so as soon as their assets like real estate are sold, they are ready to leave Korea.”

“Demand is on the rise, as people are trying to join in [on the program] before the minimum investment amount is increased to $1.35 million in September,” said Jung Yi-jae, a director of Coryo Emigration Corporation. “The number of areas for investment is also likely to decrease.”

The United States is an attractive place to immigrate to, because once one parent is issued an EB-5 visa, their whole family becomes eligible for a green card under certain conditions.

“Trump’s anti-immigration policy made it harder to immigrate through employment [in the United States],” said Mr. Kim, a 51-year-old businessman. “I am looking into immigration through investment for my son, who is studying overseas.”

Singapore is another attractive place for businessmen to settle down, as the country has a low tax rate and is without any inheritance or gift taxes. Corporate taxes are also lower than Korea at 17 percent. The country’s low crime rate and outstanding educational system creates a lot of competition for immigration.

Among Asian countries, Singapore is a popular place for global millionaires. In 2018, some 1,000 millionaires immigrated to Singapore, according to a report by the global market research group New World Wealth and AfrAsia Bank.

On the other hand, Singapore has higher standards for investor visas than the United States. People interested in immigrating to the country need to invest at least 2.5 million Singapore dollars ($1.8 million) in a start-up or a fund in the country and investors will also need documents that back up their experience managing a business with yearly revenues of at least $36 million.

However, major shareholders in companies with assets of 1.5 billion won ($1.2 million) in value in Korea may have to think twice before immigrating to another country. This is because the Korean government taxes these people with an exit tax of up to 20 percent. This policy was implemented in 2018 to prevent people from evading taxes by moving overseas, but policies alone cannot prevent people from moving out of the country.

“With the cost of employing people going up and investments shrinking, the anxiety of Korea being a difficult place to manage a business is showing through immigration,” said Sung Tae-yoon, an economics professor at Yonsei University. “Instead of stopping assets from going out of the country with policies, the government needs to create a favorable environment for [companies] to do business.”

“A detailed solution is needed for inheritance tax problems,” said Shin Jang-sup, an economics professor at the National University of Singapore. “Solutions like transferring management of a company through a public trust are needed before CEOs of medium-sized companies turn their eyes to overseas countries.”