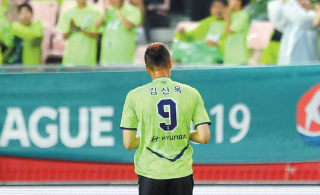 Kim’s K League 1 club, Jeonbuk Hyundai Motors, announced Monday that the 31-year-old has agreed to a transfer to Shanghai Greenland Shenhua in the Chinese Super League. Terms of the deal were not disclosed, under a mutual agreement between the two clubs, though Chinese media have reported that Kim has signed a three-year deal with 5 billion won ($4.2 million) in annual salary and 7 billion won in transfer fee.

In Shanghai, Kim will be reunited with his former Jeonbuk boss Choi Kang-hee, who took over the team last week after stepping down from the bench at another Chinese club, Dalian Yifang FC.

Kim made his K League debut with Ulsan Hyundai in 2009 and spent seven seasons there. The 196-centimeter (6 feet 5 inches) striker won the MVP award in 2013 when he tied for the league lead with 19 goals.

Kim joined Jeonbuk before the 2016 season. In three full seasons with the new club, Kim won back-to-back K League 1 championships in 2017 and 2018 and earned the Asian Football Confederation (AFC) Champions League title in 2016.

Kim scored his league-leading ninth goal of the 2019 season in what turned out to be his final home match with Jeonbuk on Sunday, and he has 132 goals in 350 career matches in the Korean league.

After his goal in Sunday’s match, Kim went down to his knees and took a bow to fans at Jeonju World Cup Stadium in Jeonju, North Jeolla.

“I’ll never forget passionate support from my Jeonbuk fans,” Kim said in a statement released by the club. “I am sorry that I couldn’t be around to spend more time with you. I’d like to thank you all for your continued support.”

Choi, a six-time K League Coach of the Year, left for the Chinese Super League after last season but is on to his third club already. He began the year at the helm of Tianjin Quanjian FC but jumped ship in February amid legal problems surrounding the club’s parent company.