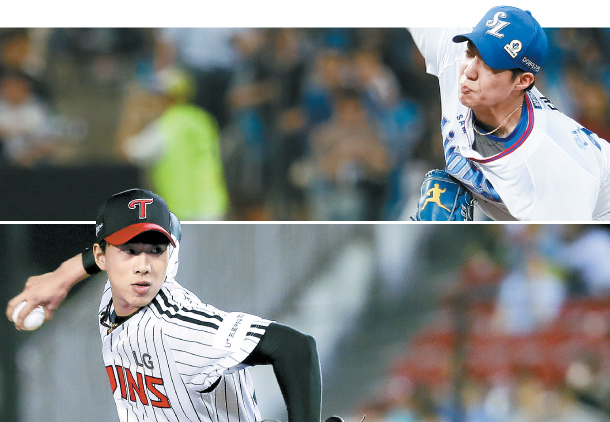 From top: Won Tae-in of the Samsung Lions and Jung Woo-young of the LG Twins throw a pitch during a game. [YONHAP, NEWS1]

As the KBO nears the halfway point, the 2019 Rookie of the Year contenders appear have narrowed down to just two pitchers - Jung Woo-young of the LG Twins and Won Tae-in of the Samsung Lions.

The budding rivalry is made all the more interesting as the two pitchers have different styles, play in different positions and come from completely different backgrounds.

At the beginning of the season, it was Jung that first took the lead in the Rookie of the Year race. As a sidearm pitcher, Jung can throw different types of pitches, and his speed is only getting faster. At the beginning of the season, the average speed of his pitches was about 140 kilometers per hour (87 miles per hour), but recently Jung has got it up to around 145 kilometers per hour.

Interestingly, Jung didn’t receive much attention during the rookie draft last year. As he took a year off in middle school due to a knee injury, he was a year older than the other high school graduates and was undervalued compared to Lotte Giants’ sidearm pitcher Seo Jun-won.

Due to this, he was drafted by the Twins in the second round but his rating changed completely when the team left for spring training. He was quickly evaluated as a player that can help the team right away and was added to the entry from the opening game.

Jung proved them right. In his first seven games in the KBO he tossed 11 and one thirds of an inning as a relief pitcher and has now become the Twins’ setup man. As of Sunday’s game, Jung has picked up four wins, three losses, a save and 10 holds with a 2.66 ERA in 50 and two thirds of an inning.

Jung’s strength is to get his out counts by leading the batters to hit a ground ball. As relief pitchers get on the mound in difficult situations, grounders are considered just as important as the pitchers’ ability to strike out batters. A relief pitchers’ best friend is often a good double-play ball.

But it’s not only Jung who wants to be named the KBO’s Rookie of the Year. The Twins, too, have set high expectations on seeing their player win the prestigious award. Looking at the past winners of the Rookie of the Year award, the Twins haven’t had much luck as the most recent player to win the award was Lee Byung-kyu in 1997, the Twins’ current batting coach.

Due to this, Jung’s performance in the first half of the season has quickly won over the fans. In the All-Star fan votes, Jung topped the Nanum Team in middle reliever, receiving a total of 480,668 votes. If Jung does get selected onto the All-Star best lineup, he will become the first ever high school rookie pitcher to achieve such a feat.

Against Jung, the Lions’ Won arose as a strong rival. Unlike Jung, Won has received attention for years as a baseball prodigy in the making.

For Won, baseball has always been around him. Won’s father was drafted by the Lions after he graduated from Yeungnam University in 1984, but instead he played for an amateur team. After he retired, he managed the Kyungbok Middle School, now called Hyupseong Gyeongbuk Middle School, baseball team for more than 20 years, helping raise some notable players including Lions’ outfielder Koo Ja-wook and infielder Kim Sang-su.

Since middle school, Won was a standout player and was regularly mentioned as the Lions’ top pick for his ability to bat and pitch. As expected, the Lions drafted Won in the first round. Last year, he was selected to represent the Korean youth national baseball team and helped Korea win the Baseball Federation of Asia’s U-18 Baseball Championship.

At the beginning of the season, Won started as the Lions’ relief pitcher. However, as the Lions’ starters didn’t meet expectations and left the rotation due to injuries, Won was given a chance in May to step up to the plate from the start of the game.

With his ability to toss a fastball at 150 kilometers per hour and his strong mentality to stay calm on the mound, starter seemed just the right role for the rookie. As of Sunday, Won has picked up three wins, four losses and two holds with a 2.58 ERA in 17 games.

Although he has only picked up three wins out of 10 games as a starter, his statistics aren’t bad and most importantly, he didn’t miss a game in the rotation. Won was given a short break after his start against the Hanwha Eagles on June 22 and, once he returned on July 6 against the NC Dinos, he once again had a solid game, giving up two runs throughout six innings.

If either of those two pitchers wins the Rookie of the Year award by the end of the season, they will become the first rookie pitcher straight out of high school to win the award since Im Tae-hoon of the Doosan Bears in 2007.