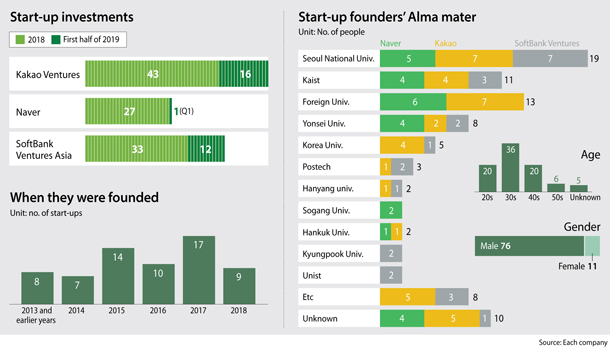 The three most powerful local venture capital companies - Naver, Kakao Ventures and SoftBank Ventures - prefer investing in companies started by people in their 30s with degrees from the best schools: and with an abundance of experience.

A study by the JoongAng Ilbo found that these three venture capital companies invested in 132 start-ups in Korea and abroad from 2018 to the first half of this year.

Nearly half, or 49 percent, was invested in 65 Korean companies, with 87 start-up founders.

The JoongAng Ilbo found that the companies that attracted investments were run by people who graduated from Korea’s top educational institutions.

KAIST came in second with 11 people, or 13 percent, while Yonsei University trailed behind with eight, Korea University with five and Postech with three.

Companies backed by graduates of these five universities accounted for 53 percent of the total investments in the first half.

This is particularly interesting considering the fact that the venture capitalists themselves said they did not consider the academic background of these entrepreneurs when reviewing these companies for investments.

“We’ve only looked at their business plans,” said a Kakao Ventures’ official.

Meanwhile, some 13 start-up founders who won investments from the companies attended schools abroad, which was 15 percent of the total.

“Statistically, teams with great ideas are usually the ones who graduated from high-ranking schools,” said Oh Jong-wook, investment team manager at the venture capital firm Capstone Partners. “Especially in the case of KAIST, the school supports various start-up activities on campus. And that’s the reason they have so many talented start-up founders.”

The JoongAng Ilbo also found that today’s start-ups are driven mostly by people in their 30s.

Among the 87 people who received venture capital in the first half, 36 people, or 41 percent, were in their 30s.

Entrepreneurs in their 30s and 40s accounted for 64 percent overall.

But there were older people who succeeded in attracting investments.

Six were in their 50s, which accounted for 7 percent of the total.

One was Lee Jae-woong, 51, CEO of car-sharing company Socar. Lee was the founder of Korea’s second-largest Web portal Daum, which is owned by Kakao. Lee’s Socar got an investment from SoftBank Ventures.

Choi Hwi-young, 55, is another famous figure. He won an investment from Naver for his trip information service app Triple.

Choi was once CEO of Naver.

Kim Jung-hwan, the 51-year-old CEO of game company Nyou, succeeded in getting an investment from Kakao Ventures in the first half. Between 2015 and 2016, Kim headed Blizzard Entertainment in Korea.

Kim Su-kwon, the 39-year-old founder and CEO of Extriber, a package tour platform that received an investment from Kakao Ventures, was a co-founder of Woowa Brothers, the company that developed Korea’s dominant food delivery app, Baedalminjok.

Daniel Hyunsung Shin, the 34-year-old, founder of blockchain company Terra, who also received an investment from Kakao Ventures in the first half, was founder of one of Korea’s early social commercial start-ups, Ticket Monster (TMON).

Some worry that the investments were too concentrated with these famous start-up founders.

“The reputation of these start-up founders act as a factor that attracts investments as much as the business models that are proposed,” said a venture capitalist.

The study found that among start-up founders, 48 people, or 55 percent, launched their own business after experience at either conglomerates or IT companies.

Cases in which the founders started a company right out of college or graduate school only accounted for 31 percent, or 27 people.

“This shows that in order to be a successful start-up, one needs to build a sufficient amount of experience in any form,” said Jung Kwang-ho, a professor at the Seoul National University’s graduate school of public administration. “Rather than mindlessly funding start-ups, the government should switch its plan and help novice start-up entrepreneurs build enough experience before starting a business.”

The study also found that only 11 of the start-up founders who succeeded in getting investments, or 13 percent, were women.

Among the 65 companies, more than half or 36 companies were founded after 2016.