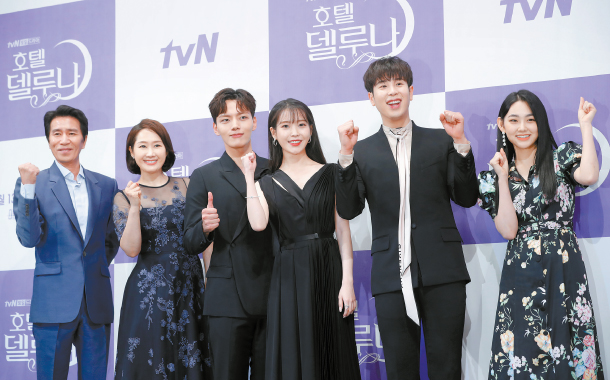 The news that big name stars Lee Ji-eun, also known as singer IU, and Yeo Jin-goo, had been cast as the stars in the upcoming tvN drama series “Hotel Del Luna” caused quite a stir when it was announced earlier this year. People were instantly curious to see how the mysterious “horror-filled romance” was going to play out and eager to see what surprises were in store. Well, this Saturday, the wait is finally over.

Lee plays a haughty, extravagant spirit named Jang Man-wol who owns the Hotel Del Luna, which only serves spirits and ghosts who roam about Earth. Yeo plays the elite hotelier Gu Chan-seong, who has been handpicked by Jang to work at her hotel, as he can also see ghosts.

“The Hong sisters [scriptwriters Hong Jung-eun and Hong Mi-ran] have actually been preparing this script since 2013, when they were writing for ‘Master’s Sun,’ at SBS,” said director Oh Choong-hwan at the drama’s press conference held on Monday.

“Since the story involved a lot of CGI technology, the script was delayed for a long time. As we had more time to contemplate the plot and the characters, the writers and I thought the main character, Jang, had to be Lee. It was the perfect match.”

Oh emphasized that although Jang seems glamorous on the outside, she hides a sad past which makes her a very delicate and lonely character. When Lee started filming, Oh was proud his intuition that the actor was a perfect fit for the role was correct.

Lee, on the other hand, did not expect to return to TV so soon. “Thankfully, I have received a lot of praise about my portrayal of Jiahn in ‘My Mister’ (2018),” said Lee, smiling shyly. “I wanted to return in a more cheerful role. When the script for ‘Hotel Del Luna’ came in, I was both surprised and grateful that Jang’s part was offered to me, but I was first doubtful that I could pull off such a complex character.”

However, when Lee met with the Hong sisters and the director, they assured her that there was no one else they considered for the role. “I asked a lot of questions [during the meeting] but when the writers saw I was still hesitating at the end, they said, ‘It’s natural for you to be prudent, but when such a charismatic, strong, and fun character comes to you, we think it’s better to leap at the chance.’” Their confidence was the boost Lee needed to say yes.

“As we met up several more times to discuss my character, all of us had different interpretations about Jang,” Lee said. “And I saw similarities between the character and myself. I, as an artist and an actor, am also judged in the public eye. Since Jang [is] more dimensional than other roles I’ve played, I wanted to show more sides of myself that I haven’t shown to the audience [yet].”

Yeo was similarly drawn to his role because it was different from the previous characters he’d played.

“My roles have been more focused on how the character himself grows and develops as the story carries on,” Yeo said. “For this role, however, Gu is the one who guides and heals the customers who come to visit the hotel.”

The series gained press attention for its unique broadcasting schedule. The series will be picking up from the end of part 2 of the controversial “Arthdal Chronicles,” which will take a two-month break before airing its final part beginning Sept. 7.

“Although we were planning to air around this period, we didn’t expect to air in-between the ‘Arthdal Chronicles,’” the director admitted. “Still, we’ve taken plenty of time to prepare for this work, so we weren’t too worried [about the time slot]. We really put a lot of effort in creating beautiful, dream-like scenes through CGI because it needs to be convincing that the humans and ghosts are co-existing.”

Oh also directed popular SBS drama series “Doctors” (2016) and “While You were Sleeping” (2017). For his previous works, he took care to make the shows look pretty and romantic, but also realistic. For “Hotel Del Luna,” however, Oh and his crew let their imagination run wild with all of the technology at their fingertips.

But the usage of CGI and artistic elements aren’t the only differences from his other works.

The shooting of the drama is also coinciding with the implementation of the government’s 52 hour workweek guidelines that went into effect on for the television industry on July 1.

Oh said that, so far, the implementation had not taken a toll on show’s production schedule, and the crew took extra care to start filming in advance to abide by the protocol.

“But I confirm this on behalf of my staff that we have been shooting on sets with better working conditions, which eventually uplifted the overall mood [on set]. We will continue to think of more efficient ways to shoot the series so that ultimately the entire crew can continue to work in an upbeat atmosphere, where we can concentrate when we need to and rest when we need to.”