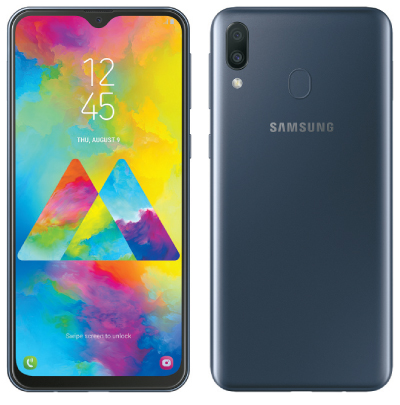 The M20, launched earlier this year in India, is part of Samsung’s low-price M series line-up. It was the company’s first smartphone to be retailed exclusively online. Both the M10 and M20 sold out three minutes after going on sale on India’s Amazon website, according to Samsung. Only the M20 will be released in the domestic market.

The launch in Korea comes relatively late, as the phone has already been released in a number of countries including the United Arab Emirates and Russia. Korean consumers are generally thought to prefer high-end phones, so electronics companies tend to focus sales of budget models overseas.

This strategy, aimed to appeal to young millennials, marks the first time that Samsung has collaborated with an online fashion retailer. It also marks a first for Musinsa - while the fashion online mall has previously sold some audio-related electronics, this is the first time it has had a smartphone up for sale.

The M20 comes in one color, charcoal black, with a price tag of 220,000 won ($186). It has a battery capacity of 5,000 milli Ampere hours (mAh), larger than the company’s most recent high-end Galaxy S10 series, and an Exynos 7904 octa-core processor. The device has three cameras: one eight megapixel camera on the front and two on the rear at 13 and 5 megapixels that offer F1.9 aperture and ultra-wide modes.

It features an Infinity-V display which has a v-shaped cut out in the center at the top of the screen for the camera. It can be unlocked through fingerprint and face recognition.