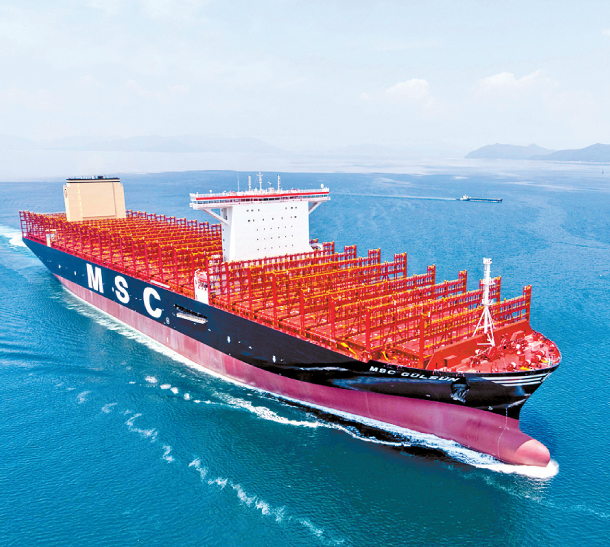 Named the MSC Gulsun, the ship can carry up to 23,756 twenty-foot equivalent units (TEUs) at once.

After completion, the MSC Gulsun embarked from Samsung Heavy’s shipyard in Geoje, South Gyeongsang, last Saturday, three weeks ahead of schedule. This was the first container ship delivered from MSC’s order for six 23,000 TEUs, placed in September 2017. The remaining five will be delivered by February 2020.

Apart from its massive size, the ship also comes equipped with Samsung Heavy’s latest technology like the “Svessel” smart ship system, which can analyze navigation data to suggest the most cost-efficient and safest sea route. Considering stricter regulations to come for sulfur oxide emissions next year, the ship is also equipped with a scrubber, a system that removes particulate matters from exhaust emissions after fuel combustion, and was structurally designed to be easily adapted to an LNG ship in the future.

Samsung Heavy has been pushing efforts to maximize the size of container ships starting with the development of a 6,200-TEU container ship in 1990, when 5,000-TEU ships were the norm in the industry. The shipbuilder went on to produce increasingly large vessels, hitting the 20,000-TEU milestone in 2015.