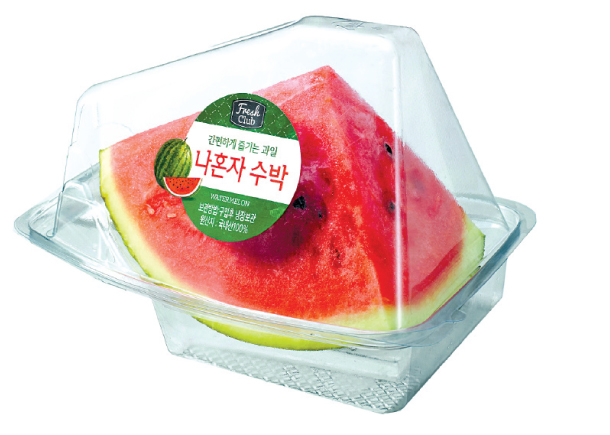 Chunks of watermelon are now on sale at Emart as a gradual rise in single-person households sees sales of fruit in smaller portions gaining popularity, according to the discount chain. [E-MART]

The rapid rise of single-person households in Korea is boosting sales of fruit and snacks in unconventionally small portions.

Discount chain Emart first started catering to this trend last year when it began selling watermelon by the chunk. The popularity has only increased this year - sales of the segmented fruit shot up 67 percent on year in June, the company said Monday. The chunks of watermelon are individually packed and cost around 4,000 won ($3.59) for 600 grams (21 ounces), roughly one-eighth of a watermelon.

Emart first started downsizing its watermelon range in 2017, when it started selling half a watermelon, before taking this a step further last year as the number of single-person households continue to rise. A smaller chunk of watermelon is a more manageable portion for somebody living on their own.

Smaller watermelons also appear to be benefitting from the changing consumption pattern.

An average watermelon weighs between 9 kilograms to 10 kilograms.

The number of single-person households as of last October stood at 5.79 million, accounting for 29.2 percent of all households in Korea.

Following the growing preference for smaller fruit, Emart has also started offering black mango watermelons and apple watermelons, both of which weigh between 3 kilograms to 4 kilograms.

“Emart plans to analyze consumer trends and expand the range of small-sized fruits offered at the stores with the goal of attracting single- and two-person households to visit stores more frequently,” said a spokesperson for Emart.

Other companies are taking a similar approach.

Haitai Confectionery and Foods reduced the size of its existing snacks like Oh Yes chocolate coated cakes to bite-size, while Orion similarly unveiled a bite-sized version of its To You Crunchy chocolate and Diget mini. Mongshell from Lotte Confectionery and Oreo from Dong Suh Foods are among several other brands that have recently appeared in smaller sizes.

“Fruits and snacks coming out in smaller sizes could be a reflection of the rise in single-person households,” said Kim Min-kyoung, a professor teaching at the department of food marketing and safety at Konkuk University. “But it could also be a business strategy by companies to raise the price of each unit sold, as they are able to sell smaller amounts at a higher price than it would have actually cost if consumers bought the item as a whole.”