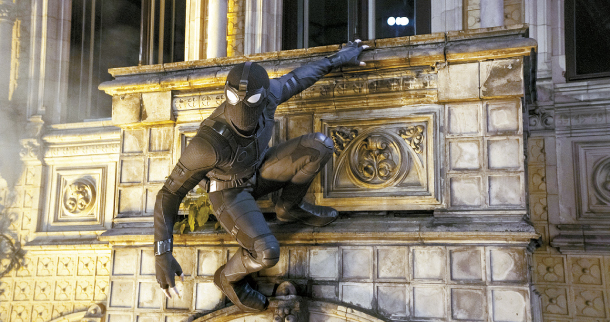 The top spot at this weekend’s box office was taken by “Spider-Man: Far From Home.” Although Disney’s “Aladdin” ranked second, the musical film has sold over 9.2 million ticket sales thus far. [SONY PICTURES]

This weekend, the local box office was dominated by foreign films, with four out of the top five films coming from overseas.

“Spider-Man: Far From Home” climbed to the No. 1 spot in its debut weekend, selling an impressive 2.9 million tickets at showings in 2,142 screens, according to the Korean Film Council. After the film’s stars - Tom Holland and Jake Gyllenhaal - visited Korea, the film was released on Monday at midnight. Although the news excited Marvel fans who were able to see the film a few hours earlier than they expected, other smaller-budget local films raised concerns that it was another way for the Marvel franchise to monopolize local screens.

The story continues from “Avengers: Endgame,” showing how 16-year-old protagonist Peter Parker struggles to cope with the death of a role model and questions his role as an Avenger.

“Aladdin,” although ranking second for the weekend, continued to steadily reign over the box office, gaining an additional 604,000 ticket sales while playing at 841 screens, bringing its total ticket sales to 9.2 million.

The feat has been achieved in just 46 days since its premiere - even faster than the 2018 musical film “Bohemian Rhapsody,” which sold nine million tickets 60 days after its release and ultimately sold a total of 9.9 million tickets. Movie experts say it’s only a matter of time before the Disney musical hits the 10-million-admissions milestone.

“Toy Story 4,” another Disney film, took the third spot at the box office, having sold 350,000 tickets at 813 screens. Although some fans of the Toy Story franchise were worried that another film would ruin the well-liked ending of the third film, they have embraced the fourth film.

The story pushes forward with the toys’ new adventures with their new owner, Bonnie, and Woody’s struggles to take care of her new favorite toy, Forky, whom Bonnie made from a spork.

Director Bong Joon-ho’s “Parasite” placed fourth over the weekend, selling nearly 90,000 tickets at 471 screens. Although the craze over the Palme d’Or-winning film has been dampened somewhat due to the success of “Aladdin,” it has quietly sold over 9.7 million tickets in just 39 days.