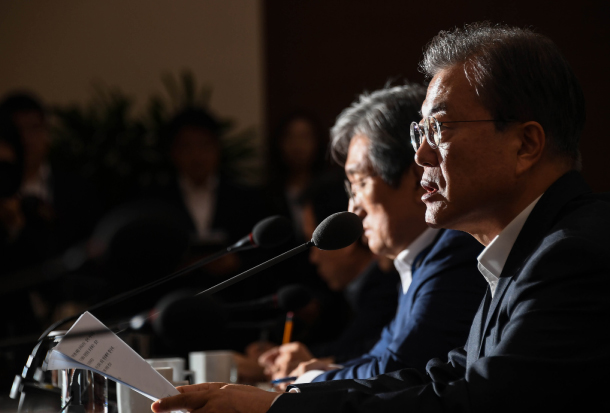 President Moon Jae-in presides over a meeting with senior secretaries in the Blue House on Monday. [JOINT PRESS CORPS]

President Moon Jae-in issued a warning to Japan on Monday that Seoul will respond if Korean companies suffer from Tokyo’s newly imposed export restrictions, and lashed out at economic retaliations that have a “political purpose.”

Moon devoted his opening remarks for a senior presidential secretariat meeting to the snowballing concerns about Japan’s restrictions on crucial supplies for Korea’s semiconductor industry.

“Following Japan’s recent trade restrictions, Korean companies are concerned about disrupted production and the global supply network is being threatened,” Moon said at Monday’s meeting with senior aides at the Blue House. “Not only Korea, but the whole world is concerned about the move to restrict mutually beneficial deals between private companies for a political purpose.”

Korea and Japan share a bitter history, including Japan’s 1910-45 colonial rule of Korea. Enslavement of Korean women in wartime brothels and conscription of forced laborers have been thorny issues. While Korea has demanded compensation for individual victims, Japan insists that a 1965 bilateral pact settled the issues “completely and finally.”

Bilateral relations have deteriorated since Moon took office and scrapped an agreement to settle the issue of Japan’s wartime sexual enslavement of Korean women, signed in 2015 by his predecessor. The diplomatic chill worsened after the Supreme Court of Korea ruled last year that Japanese companies must pay compensation to individual Korean victims of wartime forced labor.

Moon said Monday that the government and the business community must closely cooperate and communicate, promising the Blue House and concerned ministries’ efforts to support the companies affected by the new restrictions.

“At the same time, the government will calmly work to find a diplomatic resolution,” Moon said. “For both countries, a vicious cycle of attack and counterattack is never desirable. But our government will be forced to take necessary countermeasures if Korean companies actually suffer damages. I don’t want the situation to come to this.”

A presidential official said Monday that Moon’s promise for a diplomatic resolution could involve the Korean ambassador to Japan, the National Security Council or presidential diplomacy.

“Moon is saying he wants to stop the complete destruction of the friendship between the two countries,” the official said. “He is saying he doesn’t want the bilateral relationship to face a point of no return.”

The official stressed that a diplomatic resolution does not mean that the administration will change its stance on the forced labor issue. Eight months after the court ruling on the forced labor compensation issues, the Korean government proposed last month that Korean and Japanese companies voluntarily contribute to a fund to compensate the victims. Abe, however, quickly rejected the proposal.

Moon also asked the ruling, opposition parties and the public to unite and support the government and companies. He said the government will come up with short-term measures to minimize the fallout for companies while creating a long-term strategy to resolve the structural problems of the Korean economy and improve the trade deficit with Japan. While Korea’s manufacturing industry is the world’s sixth largest, it still has a critical vulnerability, Moon admitted. The manufacturing industry heavily relies on imports of core components, materials and equipment, so its added value is relatively low and it is very vulnerable to supply disruptions, he said.

Moon said a recently announced “manufacturing industry renaissance” strategy is focused on localization of components, materials and equipment, vowing to make it the top priority of his national economic projects. Moon said the government will use all possible resources including budgets and tax benefits to support companies and urge businesses to expand investments and technology developments in order to overhaul the current import-dependent industrial structure.

The Moon administration has been communicating with companies likely to be hit by the new restrictions. The National Security Council of the Blue House already defined the restrictions a “political retaliation,” and Prime Minister Lee Nak-yon had a meeting with concerned ministers on Saturday.

Deputy Prime Minister for the Economy Hong Nam-ki and Kim Sang-jo, the chief of staff to the president for policy, met with some tycoons on Sunday. “The meetings were to check on actual damages suffered by companies and their ability to withstand the crisis if the situation continues,” said an aide to Kim.

Moon will also have a meeting at the Blue House with heads of Korea’s top 30 companies this week to discuss the situation.

The Blue House was cautious that Moon’s message would be interpreted as a counterattack. “Some said the message was to hit back at Japan strongly, but that interpretation is only fair when we have corresponding actions,” a presidential aide said. “Today’s remarks constitute a strong message that Moon does not want friendly relations between the two countries to be damaged any more.”

While Moon was relatively restrained in his messaging, the ruling party decided to head a campaign to attack Japan. The ruling Democratic Party (DP) said it will launch a special team to respond to Japan’s economic retaliations, and Rep. Choi Jae-sung, an ally of Moon, will head the campaign.

“It is not just economic retaliations. Japan is declaring an act of economic aggression,” Choi told the JoongAng Ilbo on Sunday. “If Korea reacts defensively, companies will end up with larger damage. After Japan has the legislative election on July 21, we will take full-scale measures.”

The DP proposed a meeting between Moon and leaders of five major political parties to discuss the situation. “There can be no division between the ruling and opposition parties on pending diplomatic and security issues,” DP Chairman Lee Hae-chan said Monday morning.

The main opposition Liberty Korea Party (LKP) said the DP must not react emotionally, but said it will support the government’s attempts to resolve the crisis. “Party members agreed that the crisis is too serious to just blame the Moon administration’s failed diplomacy,” an LKP leader told the JoongAng Ilbo on the condition of anonymity.

“The ruling party decided to create a special team in a hurry, but an emotional argument is undesirable,” LKP Chairman Hwang Kyo-ahn said Monday morning during a party leadership meeting. “Provoking anti-Japan sentiment at this point does not help the national interest.”

Hwang said Moon must resolve the crisis diplomatically because the current crisis was triggered by political and diplomatic mishaps.

Rep. Na Kyung-won, the LKP floor leader, also warned against politicians’ emotional responses. “We must focus our efforts on stopping the retaliations and overcome the crisis,” she said. “As soon as Japan’s election ends, we will contact our counterparts in the Japanese legislature.”

Floor leaders of the ruling and opposition parties also agreed Monday to send a delegation of lawmakers to Japan, accepting the National Assembly speaker’s idea. They also agreed to adopt a resolution to urge Japan to retract the restrictions.