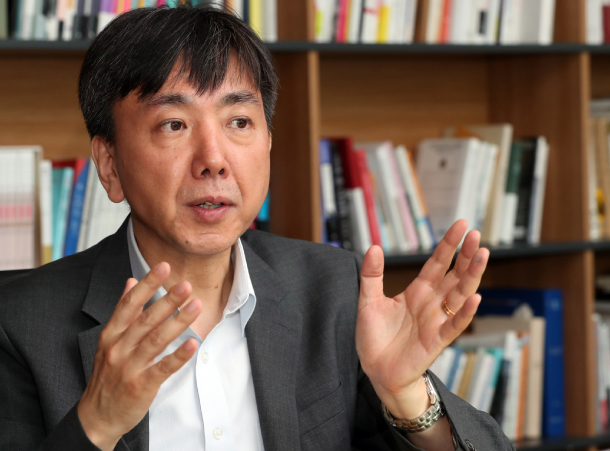 The “trust” issue that Japanese Prime Minister Shinzo Abe brought up as the reason for imposing recent export restrictions on Seoul has no basis in World Trade Organization (WTO) regulations, according to a seasoned trade law expert in Korea in a recent interview.

Abe’s comments will instead contribute to highlighting the problems with the Japanese measures, ultimately working against Japan, added Lee Jae-min, professor of international law at the Seoul National University School of Law, in a July 5 interview with the JoongAng Ilbo.

Lee, who has taken part in multiple WTO dispute settlement proceedings, has been teaching international law at Hanyang University and Seoul National University since 2004. He served as a diplomat for 10 years beginning in 1992.

In an interview with a Japanese media outlet on July 2, Abe said the newly announced restrictions on Seoul “comply with the WTO regulations” and Tokyo revised trade measures with Seoul that were based on “mutual trust.”

A. There is no clause in WTO regulations that exceptionally limits trade as a result of degraded mutual trust. That means slapping on trade restrictions is impossible if the reason given is soured trust.

The Korean government is considering lodging a complaint with the WTO.

Korea appears to be equipped with the majority of the requirements for filing a complaint. We still need more details, meaning Korea needs to check how Japan’s renewed export permission works. Regrettably, that process may take more than several weeks.

Why did the Korean government bring up Article XI, the General Agreement on Tariffs and Trade?

It is the most representative article that defines free trade. Excluding several exceptions, imposing [limits on] imports or exports should be refrained from, it says. If Japan’s restrictions on its export of key materials for semiconductors materialize, it is highly likely that the Korean government will take issue with Japan’s violation of the article.

What is the process of filing a complaint with the WTO?

It begins with submitting a document requesting that both countries start discussions. The two sides should meet at least twice within the initial 60 days after the request.

The two-month period is sort of a cooling-off period. If both parties fail to reach a consensus, a panel of three people from third countries will settle the dispute. I saw many countries in dispute struggling to choose the nationalities of the panel members - those members are the ones who decide the rules.

Can’t the Korean government file for an injunction with the panel?

The panel did not receive that right from the WTO at the point of the organization’s launch in 1995.

How long does it normally take from designating the panel members to making an appeal?

It takes at least 27 months from the point of filing a complaint to receiving a final ruling in an appeals trial.

Is the appeals ruling the final procedure?

Yes. Seoul was defeated in the WTO dispute panel’s decision when it comes to Korea’s trade restrictions on Japanese seafood in the wake of the 2011 Fukushima nuclear disaster, but an April appeals ruling overturned the verdict.

Are the panel and the appeals process the only ways to lodge a protest with the WTO?

No. Another measure would be filing a complaint through one of several councils under the organization. One of them is the Council for Trade in Goods, which holds around 10 meetings a year with the participation of the entire 164 member countries. The council could serve as a tool for pointing out the problems with Japan’s export ban measures, appealing to international public sentiment.

Why does the Korean government emphasize the complaint with the WTO?

It is similar to reporting a traffic accident to the police. Bringing the case to the WTO is not the sole step available and fundamentally fixing the issue is difficult. But it has become inevitable that Korea tackles the issue, given that the conflict has already surfaced.

What do you think of the lengthy process at the WTO?

Giving up on a complaint could be interpreted by Japan as not legally taking issue with its action.

How should Korea and Japan settle the issue, do you think?

Even if Korea wins the case at the WTO, getting rid of the essence of the issue is hard. I have seen many countries reaching a compromise even after a dispute settlement process at the WTO began. Finding a point of compromise will be crucial.