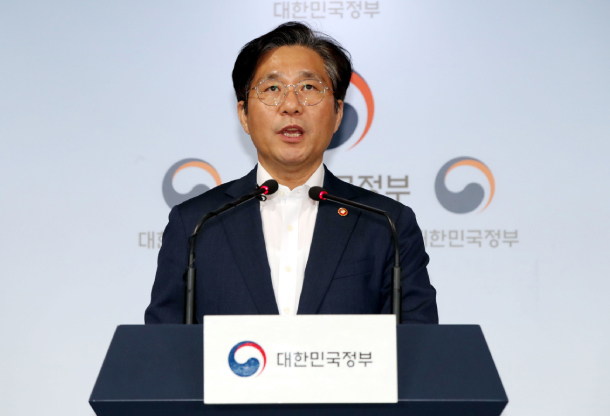 Seoul dismissed claims that it breached international sanctions on Pyongyang after Japanese Prime Minister Shinzo Abe suggested Sunday that key industrial materials exported from Japan could have made their way to North Korea via the South.

Minister of Trade, Industry and Energy Sung Yun-mo said Tuesday that the government conducted an emergency inspection of the country’s supply of hydrogen fluoride - one of three key exports now restricted by Japan to South Korea - and found that none found its way to North Korea.

“After the inspection of hydrogen fluoride, not a single piece of evidence was found that [such material] imported from Japan flowed to countries under United Nations sanctions including North Korea,” said Sung at the Central Government Complex in Seoul.

Abe linked Tokyo’s export restrictions with the implementation of North Korea sanctions in a televised debate ahead of upper house elections, underscoring a lack of “trust” in South Korea.

According to media reports, a senior official from Abe’s Liberal Democratic Party suggested last Friday on Japan’s Fuji TV that high-tech materials’ whereabouts was unclear and that hydrogen fluoride could have ended up in North Korea and used to produce chemical weapons.

Paik Ji-ah, South Korean ambassador to the United Nations office in Geneva, said Japan’s claims of breach of trust and inappropriate circumstances could not be grounds for trade measures under WTO regulations at a meeting on Tuesday in Geneva.

“There will be more opportunities to discuss [Japan’s measures] through not only the WTO but also other multilateral and bilateral talks,” said trade minister Sung Tuesday. “We will actively discuss Korea’s position through such opportunities.”

South Korea is still hoping to defuse the situation and Sung explained that bilateral talks on the matter will likely be held in Tokyo on Friday.

“As of this moment, we are negotiating to hold the talks on the 12th,” said Sung. “Those who will take part and the specific matters are currently being discussed.”

President Moon Jae-in warned Japan on Monday that the trade row could lead to retaliatory measures from Korea.

“For both countries, a vicious cycle of attack and counterattack is never desirable,” he said at a senior presidential secretariat meeting. “But our government will be forced to take necessary countermeasures if Korean companies actually suffer damages.”