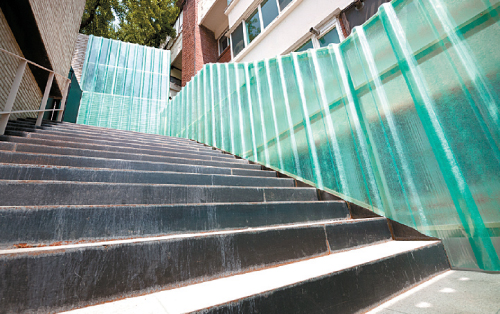 Through July 20: Kiwon Park's solo show consists of his new installation works and paintings, all of which intend to lead the viewers to “have a conversation with the space” from a new perspective and with a new sense, according to the gallery.

Visitors to the gallery will encounter Park’s “Disappear Entrance,” a translucent aquamarine color screen made of fiber reinforced plastic, which partly hides the entrance to the galley. Then the visitors will be led to take off their shoes and to walk on his “Pyramid Ground,” which are black foam sheets spread on the gallery floor. On the second floor is a small room filled with red light. Inside the room is a red vinyl curtain swaying in the red light.

Admission is free. The gallery is closed on Sunday and Monday. Go to Hansung University Station, line No. 4 , exit 6 and take bus 1111 or 2112 to get off at Seoul Dawon School stop.

Through July 28: This exhibition focuses on data, “which is the most familiar form of digital information and which seems to be neutral but is in fact not neutral,” according to the MMCA. 10 teams of artists have been chosen to highlight their different approaches to data in this show.

For example, Forensic Architecture, a team of artists, scientists, journalists and others based at Goldsmiths, University of London, present video pieces, which are part of the team’s ongoing project that traces and reconstructs the history of violence on a Palestinian Bedouin village with all kinds of data and information it has collected. 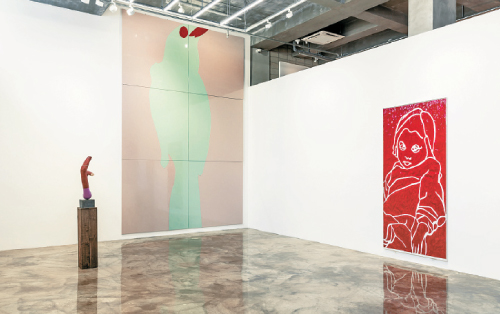 Through Aug. 4: British artist Gary Hume, a distinguished member of the Young British Artists, is hosting his first solo exhibition in Korea. Most of Hume’s pieces, which are usually painted on large aluminum panels, are instantly recognizable by their vivid colors and glossy finishes. In this exhibition, Hume features a variety of works, including the paintings: “Big Bird” (2010), a combined image of a bird that is made up of six individual panels, “Mom On The Couch” (2017), the silhouette of the artist’s mother, “Tired Child” (2016), the white outline of a young child on a contrasting red background, “Untitled” (2019), a speculative piece that contains three pole-like fixtures on a beige background, and more.

In the gallery, Hume also features some of his other works. One of which, “Sculpture 1” (2009), is an abstract sculpture made of marble and gloss paint in the shape of a contorted “V.” From other angles, it appears to look like a pair of appendages.

Through Aug. 4: The largest-ever retrospective of celebrated British painter David Hockney in Asia features 133 paintings, drawings and prints by Hockney, one of the world’s most influential living artists.

Through Aug. 25: The solo show of Choi Jeong-hwa is the inaugural exhibition at Artspace Gwanggyo, Suwon’s fourth municipal space for contemporary art shows. Choi also took charge of designing the interior of the space, which opened in the Suwon Convention Center in late March.

The new exhibition is a kind of retrospective, although it is not arranged in chronological order. It is divided into roughly six sections.

In the fourth section, viewers are encouraged to draw the three grotesque sculptures Choi created after “The Venus de Milo,” which Korean students are more likely to remember as the subject for art schools’ drawing exams rather than as an ancient Greek statue in the Louvre Museum in Paris. The viewers will also be encouraged to combine plastic caps of various colors in the splendid installation work “COSMOS+MANDALA.”

On show are illustrated movie posters Jean designed for “The Shape of Water” (2017), “Blade Runner 2049” (2017) and most recently, for upcoming Korean film “The Divine Fury,” which stars Park Seo-jun. New paintings inspired by traditional Korean colors are also on display.

Through Sept. 15: The MMCA’s 19th exhibition of their esteemed Young Korean Artists program is set to feature a variety of new works from nine rising artists, including Keem Jiyoung, Song Min Jung, Ahn Sungseok, Yoon Doohyun, Lee Eunsae, Chang Seo Young, Chung Heemin, Choi Haneyl and Hwang Sueyon. All of the participants have created a plethora of fresh, unique pieces that express their individualistic personalities as well as embody the overarching themes of the exhibition, “Liquid,” “Glass” and “Sea.”

Admission is 2,000 won. The museum is closed Mondays. Get off at Seoul Grand Park Station, Line No. 4, and take the shuttle bus from exit 4. 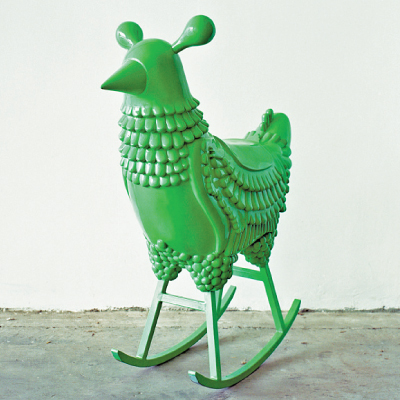 Through Nov. 17: For this exhibition, Daelim Museum transformed its gallery space into a luxurious fun house that presents the colorful world of Hayon’s imagination.

The exhibition is divided into seven thematic zones that highlight the different creative interests of the Spanish artist, known for his works with crystals and ceramics. One room is dedicated to displaying Hayon’s fine crystal vases, while another hosts human-sized, hand-painted chess pieces from “The Tournament” (2009), an installation Hayon previously displayed at Trafalgar Square in London. The artists’ paintings, furniture pieces and other crafts are also on display.

Through Dec. 29: The exhibition - Kruger’s first solo show in Asia - features the artist’s works dating back to the 1980’s as well as her more recent installation and video works.

On display are Kruger’s original “paste ups," or bolded texts about consumerism, power and sexuality laid over photographs, as well as “Untited(Forever)” (2017), a black and white room covered in excerpts from literary classics like "1984."