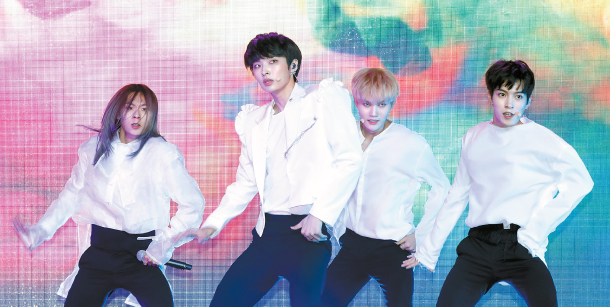 Limitless, a new four-member boy band, performs on stage for the first time during its debut showcase at Hongdae Muvhall in western Seoul, on Tuesday. Each of the group’s members (from left Jang Moon-vok, Yoon Hee-seok, A.M and Raychan) have appeared on TV before making their official debut. [NEWS1]

It may not have been the first time the members of the new boy band Limitless have taken the stage, but Tuesday signaled a new beginning for each of them.

Limitless made its official debut on Tuesday with their first single “Dreamplay” and performed for local reporters at Hongdae Muvhall in western Seoul during its debut showcase, marking a new chapter for Jang Moon-vok, Yoon Hee-seok, A.M and Raychan.

“I am going to begin a new life with Limitless,” Jang told reporters. “Today, I feel more excited than nervous because I have really looked forward to this day.”

With the surge of music competition TV programs over the past few years, it’s become increasingly common for trainees to make their first public appearance on TV before officially debuting. So, for many, the members of Limitless may be familiar.

While Raychan appeared on JTBC’s 2017 audition program “Mixnine,” the three other members competed together on the second season of cable channel Mnet’s popular “Produce 101” program the same year. Although none of them made it to the final 11, Jang was perhaps one of the biggest stars of the show thanks to his distinct long hair.

“I’ve tried so many things with my long hair that there’s virtually nothing more that I could do,” said Jang. “I don’t actually know what hair style I’ll have next. But I hope you like it!”

The quartet’s single “Dreamplay” is a dance pop song meant to have both dream-like and energetic qualities, reflecting the brightness of summer, according to group leader A.M.

“It was our dream to finally debut. And so the song is a metaphor of our goal, as if we are living in our dreams. We also want people to be a part of this dream with us,” he explained.

Since Jang is the most recognizable face of the group, many people are referring to the them as “Jang Moon-vok’s group,” which Jang hopes will change in the future.

“People talk about Limitless as Jang Moon-vok’s group because I think I have been exposed to the public the most through television and music,” said Jang.

“But I think this is because people haven’t seen the talents of the others properly yet. The members of Limitless are so versatile and talented, so much that they outpace me in a lot of ways.”

Leader A.M emphasized the uniqueness of the group, promising that fans will get a variety of things from the group.

“We are different on stage than off stage. On stage, we have our own characteristics that are strong and very distinct. We have so much that we can show as artists. But off the stage, we are a group of playful boys who are very bright and cheery,” he said.

“I think if we just try our best, like we are doing right now, people will be recognize us more,” Raychan said.

Yoon added, “We are so close to each other, all the more because we share the same dream. We like being on stage, and I hope that we get to continue doing so in the future.”