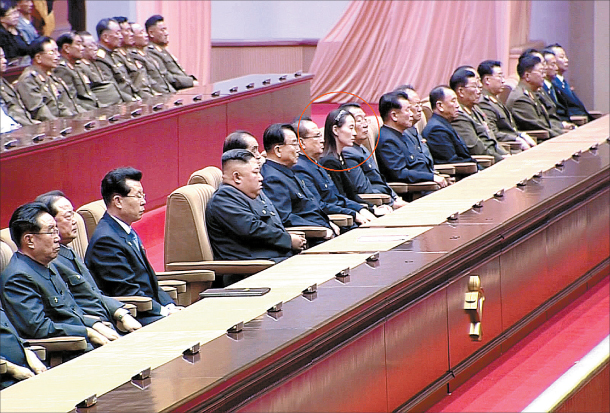 The political profile of Kim Yo-jong, the younger sister of North Korean leader Kim Jong-un, appears to have been elevated, based on footage broadcast by Pyongyang’s state media on Monday.

At a party convention commemorating the 25th anniversary of the death of Kim Il Sung - North Korea’s founder and the patriarch of the ruling Kim clan - Kim Yo-jong sat fourth to the left of Kim Jong-un in the front row, after Pak Pong-ju, vice chairman of the State Affairs Commission, and Ri Man-gon and Ri Su-yong, both deputy party chairmen, according to a Korean Central Television broadcast.

In communist North Korea, which strictly adheres to protocol, the proximity of cadres’ seats to that of the leader in the center is usually indicative of their rank and status. Around six or seven seats on Kim Jong-un’s side are typically reserved for top party or state officials.

To Kim Jong-un’s right sat Choe Ryong-hae, the president of the Presidium of the Supreme People’s Assembly and the country’s nominal second-in-command; Kim Jae-ryong, cabinet premier; and two other deputy party chairmen in Pak Kwang-ho and Kim Phyong-hae.

While Kim Yo-jong’s formal position is first vice director of the Propaganda and Agitation Department of the Workers’ Party, her seating would place her ninth in terms of rank.

Her elevated status has been noted before, at a reception ceremony for Chinese President Xi Jinping’s visit to Pyongyang on June 20, when she stood seventh in line to shake Xi’s hand. This was one position further ahead than even Kim Su-gil, director of the General Political Bureau of the North Korean People’s Army and the highest-ranking military official in the North after Kim Jong-un.

According to South Korea’s National Intelligence Service (NIS), this arrangement indicated Kim Yo-jong had been elevated to the level of a national leader, a promotion from her previous role as a protocol assistant to her brother. The job of protocol secretary to the leader is now believed to have been taken over by Hyon Song-wol, a former singer and now deputy director at the propaganda department.

On Tuesday, a senior official at South Korea’s Unification Ministry said that no definite conclusions could be made about Kim Yo-jong’s status based on Monday’s ceremony, given that seating arrangements at public events in the North did not always correspond to positions of power in the past. While the front row is indeed reserved for the highest-ranking officials, the official said, the nature of the particular ceremony on Monday could explain why Kim Yo-jong was seated so highly.

The official’s words could refer to the fact that Monday’s ceremony, held at the Pyongyang Gymnasium, was meant to celebrate the legacy of Kim Il Sung, and that as the founder’s granddaughter, Kim Yo-jong, was placed above her usual rank.

No pronouncements have yet been made by the North’s state media on any changes to Kim Yo-jong’s position. Her direct senior at the Workers’ Party Propaganda and Agitation Department, Pak Kwang-ho, delivered an opening eulogy address on Kim Il Sung at the ceremony. This was the first time in five years that Pyongyang held a large-scale memorial ceremony for the death of its founding leader.