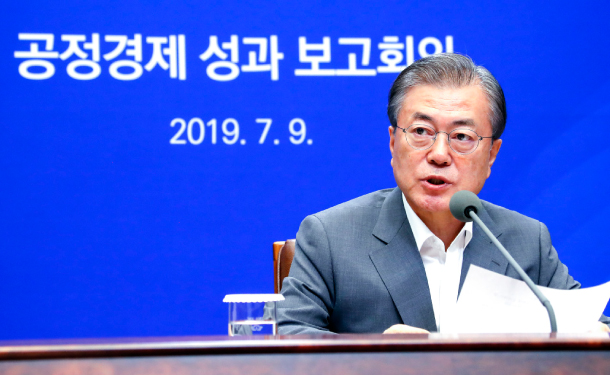 A fair economy was one of the three main economic campaign promises of the administration, along with so-called income-led growth and greater innovation. The fair economy policy aimed at rooting out corporate malpractices to create a level playing field.

In his opening remarks for the meeting, attended by about 30 heads of state-invested companies, ruling party lawmakers and top officials, Moon said public enterprises are an important part of the economy because their total budget is over 600 trillion won ($506.9 billion), about 35 to 40 percent of the gross domestic product. “Countless contractors and subcontractors are dealing with public companies directly and indirectly,” Moon said.

He said public enterprises can play a crucial role in promoting fair trade because they are at the top of industrial hierarchies that require massive investments. “They can be rule makers,” Moon said, “to reshape business practices.”

Moon listed his own government’s accomplishments in creating a fairer economy over the past two years. The National Pension Service, Korea’s largest institutional investor, adopted a stewardship code that will allow it to engage in management decisions of the companies it invests in, and Moon listed that as one of the key accomplishments.

The event demonstrated Moon’s special trust in Chief of Staff Noh Young-min and Policy Chief Kim Sang-jo. Tuesday’s event took place only 20 days after Kim was appointed to his post after heading the Fair Trade Commission. Observers said his appointment showed Moon’s satisfaction with Kim’s performance in the previous job.

It was also the first time the Blue House hosted an event devoted to actual accomplishments of an economic policy, as apposed to strategic planning. “Of the three policies, I think the fair economy policy has received the most positive evaluations so far,” Moon said during the January meeting.

The Blue House held a strategy meeting for innovation-led growth in November 2017. Only one follow-up meeting to check on its progress took place in May 2018. The Blue House has never held an event exclusively devoted to its income-led growth campaign, although it is a signature program of the administration.

During the first years of Moon’s presidency, the income-led growth program was led by Jang Ha-sung, Blue House policy chief at the time, and the innovation-led growth by Kim Dong-yeon, deputy prime minister for economy. Moon sacked both of them last November.

While Kim’s successor Hong Nam-ki is less involved in the innovation-led growth program, Blue House Chief of Staff Noh is the driving force behind it. The Blue House selected system semiconductors, bio-health and future automotive industries in April as the core investment fields for the innovation policy, three months after Noh’s appointment. Noh, a former three-term lawmaker, is also an entrepreneur. “As his presidency enters its midterm, Moon is emphasizing outcomes that the people can actually feel,” a presidential aide said. “It is no surprise that presidential aides who brought about such accomplishments are encouraged.”