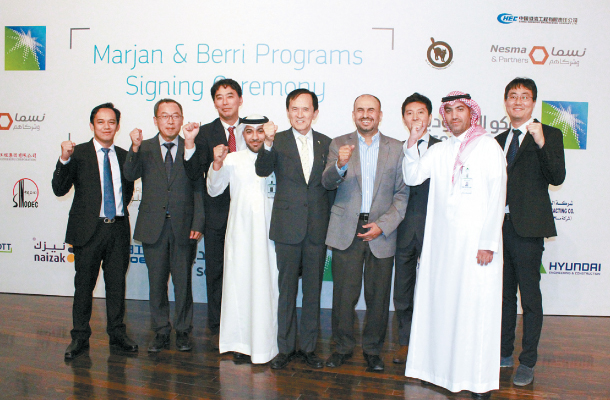 Hyundai Engineering & Construction said Wednesday that it has won two orders worth a total of $2.7 billion from Saudi Aramco for the development of a gas and crude oil processing plant.

According to Hyundai, the construction company won bids to build processing facilities as Aramco plans to develop its Marjan offshore field off the eastern coast of Saudi Arabia.

As part of the deal, Hyundai will expand Aramco’s existing processing plant, located 250 kilometers (155 miles) from the eastern city of Dammam, and also build the utility facilities for power and water needed for the plant’s operation. The plant’s expansion is expected to allow processing of 300,000 additional barrels of crude oil per day.

The processing plant’s construction is worth $1.48 billion, while the utility facilities’ cost is worth $1.25 billion.

Construction for both orders is expected to take 41 months, according to Hyundai.

Saudi Aramco had announced Tuesday that it had awarded 34 contracts worth a total of $18 billion to increase production at its Marjan and Berri oil fields.

This is not the first time that Hyundai has received orders from Aramco.

In 2012, it completed construction of a processing plant worth $1.4 billion for Aramco’s Karan gas field. The construction company is also currently building a gas treatment facility for Aramco’s Uthmaniyah project.

“We won the bid based on our technology, quality and work process demonstrated through Aramco’s Uthmaniyah project,” said a spokesperson for Hyundai Engineering & Construction. “We expect that this order […] will have a positive impact past just our company but to the broader construction industry.”

According to Statistics Korea, output from the construction industry fell 5.3 percent in May compared to the same month the previous year. The construction business survey index, which measures the industry sentiment, was at 63 points in May, the lowest in five years and six months.

Construction companies have lately focused on winning overseas orders and Hyundai also won a $1.1-billion construction bid for a petrochemical plant in Poland in May.