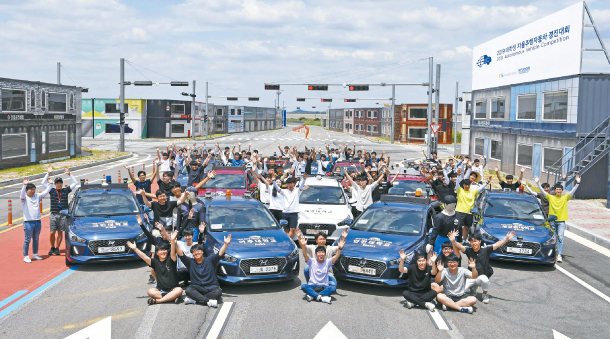 Students pose for a photo Wednesday next to the self-driving vehicles they designed and assembled for the 2019 Autonomous Vehicle Competition held in K-City in Hwaseong, Gyeonggi. [HYUNDAI MOTOR]

HWASEONG, Gyeonggi - Hyundai Motor hosted an autonomous vehicle contest for college students as it strives to establish itself as a leader in the development of self-driving systems.

The Korean automaker invited 12 teams from 11 universities across Korea to compete in a two-day competition that ended Wednesday. Teams had to equip Hyundai vehicles with their own self-driving technologies and compete for prizes in K-City, a proving ground for autonomous cars located in Hwaseong, Gyeonggi.

K-City, which covers a 360,000-square meter (89-acre) area, was completed at the end of last year and is used as a testing ground for self-driving cars. The center has attracted developers from SMEs and educational institutions to conduct dozens of tests since its opening on March 4.

As part of this year’s self-driving vehicle contest, which was co-hosted by the Korea Transportation Safety Authority, Hyundai Motor provided each team with a research-geared version of its i30 gasoline model and 70 million won ($59,000) to spend equipping the car with sensors, wires, computers and buttons. 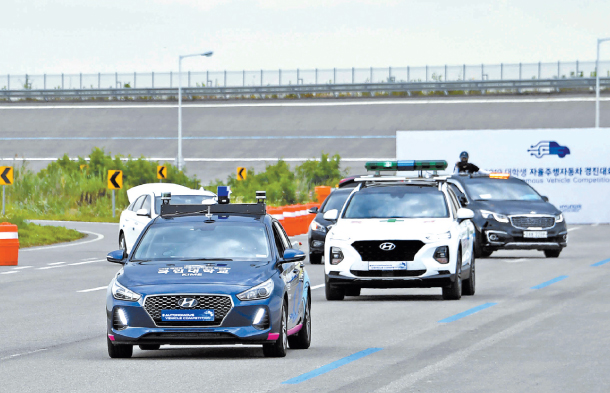 A self-driving vehicle designed by university students speeds down a track Wednesday as its performance is tested in the autonomous vehicle contest. [HYUNDAI MOTOR]

Teams were scored based on how quickly their vehicles finished the given course, and penalty lap times were added for each time the car failed to complete a given assignment.

Hyundai has hosted a vehicle technology competition annually for students since 1995, but started focusing on autonomous technology in 2010.

For this year’s competition, participating students spent 16 months designing their self-driving car technologies with a heavy focus on safety.

With regular consultations from Hyundai Motor researchers, the students carefully designed their vehicles and spent months programming, connecting thousands of electric wires within the cars and activating motion sensors on different parts of their vehicles.

Teams also visited K-City multiple times before the competition to test and tweak their autonomous vehicles.

“It was a hard process for everyone, and we conducted test drive sessions almost every day,” said Kim Seong-jae, a fourth year embedded system engineering student at Incheon University who participated in the competition as a team leader.

“We didn’t make good records in the morning or the day before, but I am just happy that we completed the course.”

Hyundai Motor said it is important that college students like Kim actively participate in the contest as self-driving technology is becoming increasingly important. The automaker is continuing to hold the contest for students as it is the best way to draw national research support for the technology.

“It is important to raise public awareness on self-driving systems and prompt educational institutions to participate in industry-wide R&D efforts.”

As more and more universities and their students take part in the program, Jang believes that Korea will be capable of leading self-driving technology development globally and stand at the forefront of the global industry.

“Although Hyundai was late to the self-driving game, we still have time, as many global automakers and technology firms have set 2024 and 2025 as target years for mass production of self-driving cars,” Jang added.

“We already have technology for self-driving cars to complete simple routes without accidents, but as an automaker, we are targeting producing high-tech self-driving cars en masse with competitive costs later on.”

At the end of the contest, Korea University of Technology and Education stood in first place to win 50 million won in prize money and a chance to visit Hyundai Motor facilities in the United States to learn more about the automaker’s progress in self-driving technology.