Participants in a boat race on the Han River by Jamsil Hangang Park paddle forward in boats they made out of cardboard boxes, tape and plastic wrap during the Hangang Summer Festival last year. The event will be held again during this year’s festival. [SEOUL METROPOLITAN GOVERNMENT]

The city government of Seoul announced on Wednesday the program for the 2019 Hangang Summer Festival, which will run through July and into August.

Seoulites will be able to enjoy movies under Han River’s bridges or while floating in a swimming pool by the river, or spend the wee hours of the night in a walkathon with thousands of others as the river reflects the night lights of the city.

“The 2019 Hangang Summer Festival is here, which means vacation by the river is just around the corner,” said Jeong Su-yong, assistant mayor of the Hangang Project Headquarters at the city government, in a press conference at City Hall on Wednesday. “We are entering the seventh year of the annual summer festival and offering more varied programs than ever. We’ll be filling up the nights with film screenings, and pop and jazz music for everyone.”

The Seoul Metropolitan Government is hosting 77 programs in the 11 parks by the river from July 19 to Aug. 18, with four themes to the programs - water festivals, jazz and classical concerts, books, films and circuses, and green environmentalism. Many of the programs are offered free of charge. 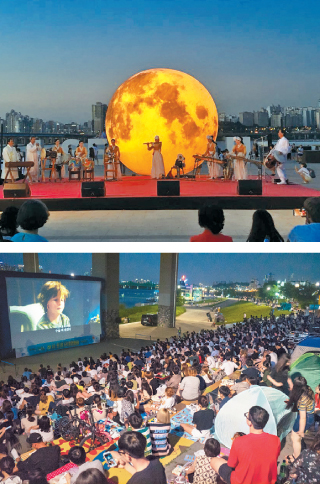 Top: A performance of traditional Korean music by the river at Yeouido Hangang Park in western Seoul as part of the Hangang Summer Festival last year that will also be held this year.Above: A film screening under a bridge crossing the Han River, which will be held every Saturday under several bridges during the festival this year. [SEOUL METROPOLITAN GOVERNMENT]

“People don’t know that the size of the 11 parks by the river altogether is 2.6 times the size of Central Park in New York,” said Yun Seong-jin, the master planner of the Hangang Summer Festival since 2014.

One of the biggest water festivals planned this summer by the river is the all-day mini water Olympics on Jamsu Bridge on Aug. 15.

“The bridge will be off-limits to traffic from the night before, and the festival will be held from 2 p.m. to 8 p.m.,” Yun said.

The city government will install a 100-meter (328-foot) long waterslide on the bridge, which will have obstacles for participants to scale to finish the race. An all-out water-gun fight will also be hosted at the Nanji Hangang Park over the weekend from Aug. 3 to 4 from 11 a.m. to 6 p.m.

The ever-popular boat race on the river will be held again this year, from 9 a.m. to 5 p.m. from Aug. 2 to Aug. 4, at the Jamsil Hangang Park. Participants are challenged to build a boat using only cardboard boxes, tape and plastic wrap. The boats must be able to carry the participants on the river through the designated route.

Jazz, indie, reggae, classical music and a mix of these genres will be offered at concerts during the first two weeks of August.

Indie rock bands like Huckleberry Finn and Okdal will perform at the Mulbit Stage of Yeouido Hangang Park from 6:30 p.m. to 10 p.m. on Aug. 2, a gig followed the next evening by gugak (traditional Korean music) artists, including the four-member band 4innori and Under the Light Studio. On Aug. 9 and 10, the same stage will host reggae and classical music concerts.

During the evenings of Aug. 2 and 3, jazz artists including Kim Jun, one of the first-generation Korean jazz musicians, Malo and the Ryu Inki Trio will be performing at the Sevit Islands in southern Seoul. The islands will also host gugak concerts the following weekend, with performers including gayageum (traditional Korean string instrument) musician Seo Jeong-min and pansori (traditional narrative singing) group MNH Studio. All concerts are free of charge.

Movie screenings will be held every Saturday throughout the festival under the southern ends of bridges Cheonho and Wonhyo, and at the northern end of Cheongdam Bridge and at the Seoul Battleship Park in western Seoul. The screenings begin at 8 p.m. and are free of charge. Movies screened will include those beloved by the Korean people and directed by Bong Joon-ho, whose “Parasite” (2019) won the Palme d’Or at this year’s Cannes Film Festival, according to the city government.

One of the most popular events at the Hangang Summer Festival every year is the Hangang Night Walk, an overnight walkathon alongside the river, with the routes ranging from 15 kilometers (9.3 miles) to 42 kilometers.

“The 10,000 spots are already filled,” Yun said. “But we may be opening up the registration briefly due to any canceled tickets.”

The walkathon will be held from 5 p.m. on July 27 to 8 a.m. the next day. The 42-kilometer route begins from Yeouido Hangang Park and moves eastward until Gwangjin Bridge, before turning back to the starting point. The festival will also be hosting 16-kilometer and 51-kilometer bike rides on Aug. 15 along the river, as well as family-oriented activities for environment conservation such as a toy-car race held from July 27 to 28 at Ttukseom Culture Complex J-Bug.