S&P forecasts a rate cut as growth ticks down again

S&P forecasts a rate cut as growth ticks down again 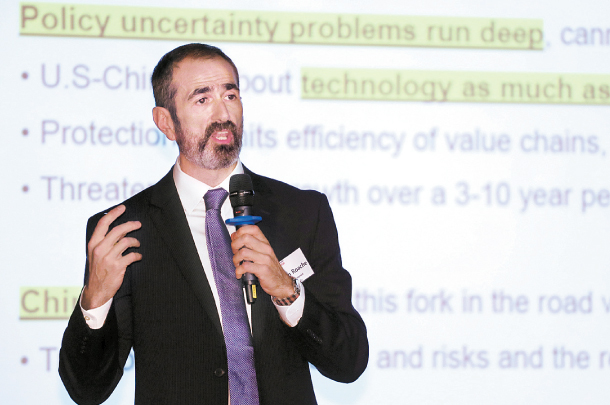 Shaun Roache, chief economist for the Asia-Pacific region at S&P Global Ratings, discusses his view on the global economy at an event held by the Korea Center for International Finance on Thursday in central Seoul. [YONHAP]

The global rating agency’s assessment came a day after it lowered Korea’s 2019 economic growth outlook to 2 percent from the previous 2.4 percent. The revision follows April’s downward revision from 2.5 percent to 2.4 percent.

The latest number didn’t factor in the effects of the trade restrictions, suggesting that the forecast could be taken down to below 2 percent.

“We did not include the recent events between Korea and Japan,” Shaun Roache, chief economist for the Asia-Pacific region, said during a seminar in central Seoul.

“The major impact is to increase trade uncertainties,” the economist said, citing reduced or delayed corporate investment as a consequence of the event.

As for its impact on credit rating of the country, a credit specialist at S&P struck a more balanced tone.

“In the near short-term, the rating will not be affected,” said Kim Eng Tan, senior director for the agency’s sovereign ratings team in Asia-Pacific region.

“We assume that the BOK will cut rates, starting this year,” said Roache, “Korea’s monetary policy is tight at the moment.”

The country’s benchmark interest rate has remained unchanged at 1.75 percent. The last time the bank adjusted the rate was in November, when it rose rates by 0.25 percentage points from the previous 1.5 percent.

To mitigate the impact of the restrictions, the Bank of Korea needs to join other major central banks that have either cut the interest rates or are preparing to trim of their benchmark interest rates, the chief economist said.

But with the global economy challenged and indicators at home weakening, the central bank has offered signs of shifting towards a potential cut, albeit not sending signals as strong as the U.S. Fed.

There was a dissent vote to lower the rate in the May meeting, while Governor Lee Ju-yeol has vowed to take measures in response to changing economic conditions, a departure from earlier dismissals of a rate cut.

The stance matches that of Fed Chairman Jerome Powell.

The chair on Wednesday strongly hinted at a potential rate cut later this month, against the backdrop of the ongoing trade tensions and concerns over the slowdown in global economy.

“For the first time since 2014, the credit quality of Korea’s top 200 companies has weakened as a result of rising debt and stalled earnings in 2018, which indicates the credit cycle is turning negative,” he said.

Entering this year, the credit ratings of big corporate players, such as SK Hynix and KCC, were cut due to challenging business environments and increasing debt burdens.