From left: Singer Yoo Seung-jun tries to enter Korea in February 2002, but is stopped by the Ministry of Justice; Yoo during a three-day visit to Korea in June 2003 for the funeral of his fiance’s father; Yoo gets down on his knees and apologizes to the public in May 2015 on the livestreaming platform Afreeca TV. [YONHAP, SCREEN CAPTURE]

The Supreme Court on Thursday rejected an appeals court ban on singer Steve Yoo (also known as Yoo Seung-jun) coming to Korea, opening up the possibility of Yoo entering the country for the first time in 16 years.

The Supreme Court ruled that it was “illegal to deny [Yoo] his overseas Korean visa.” It remanded the case back to the Seoul High Court.

Yoo filed a suit against the Korean Consulate based in Los Angeles after it refused to issue Yoo an F-4 visa, commonly referred to as an Overseas Korean visa, at the consulate in August 2015. The consulate notified Yoo’s father that his son’s visa had been denied a few weeks later, saying that he was prohibited by the government to enter Korea, and should “ask the Ministry of Justice for details.”

According to the court, the consulate returned Yoo’s files and his passport, but failed to send him a proper notification letter explaining the details of the denial, which is a mandatory part of the procedure. Upon the denial, Yoo filed a suit against the consulate in October 2015 through a Korean law firm demanding it revoke its decision.

The first two rulings were in favor of the consulate. They turned down Yoo’s case based on Article 11 of the Immigration Act, which prohibits people who are “highly likely to commit any act detrimental to the interests of the Republic of Korea or public safety.” According to the initial ruling, Yoo may “discourage active soldiers’ morale and encourage young children to evade the military,” if allowed to enter Korea and appear on TV. The decision to ban Yoo from entering Korea was made by the Ministry of Justice in 2002, and was based on the Immigration Act.

Yet, Thursday’s decision sent the case back to the Seoul High Court. According to the Supreme Court, it is “unlawful for the Korean Consulate to deny his visa just because [the government] determined that he should not be able to enter into Korea 13 years and seven months ago, without considering any other factors.” 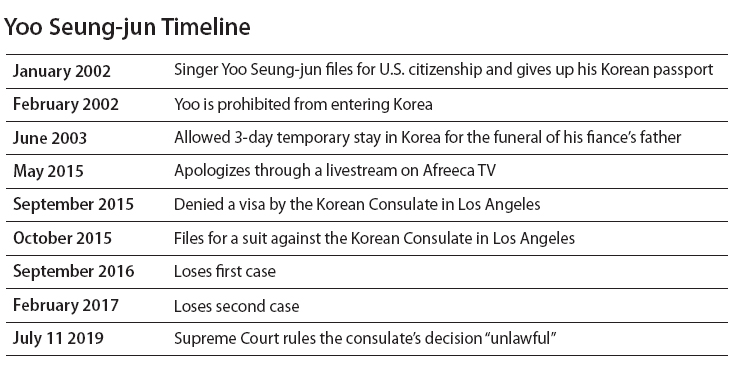 The court also ruled that it was unlawful for the consulate to go against the necessary administrative procedures in denying to issue a visa, which would have mandated them to write a formal letter of notification to Yoo.

The court did not, however, make a judgment on the government’s decision to prohibit Yoo from entering Korea.

“Yoo had been active and popular in Korea as a celebrity before he gave up his Korean nationality in 2002,” the court said. “He is liable to ethical criticism based on the fact that he had openly said he would undergo his military duty in interviews. Yet, making a decision on whether it was lawful to prohibit him from coming to Korea or refusing to issue him a visa should be deemed as a separate matter, and should be based on the current law and the principles of the law.”

In August 2001, Yoo was assigned to serve in a government office as an alternative to his military duty due to an injury to his intervertebral disk. He was scheduled to start his service in November 2001, but it was postponed until February 2002. Some people began to wonder how a healthy singer who pulled off extreme dance moves on stage was suddenly diagnosed with a spine condition, but most let him off due to the credible image he had built for himself over the years.

So when in late 2001, Yoo asked for permission to go to America to “say goodbye to his family” — which is forbidden for Korean men nearing their military duty without a special reason — he was allowed to do so, but only after two close acquaintances guaranteed that he would come back to Korea. This regulation, which allows men nearing military duty to travel abroad with a guarantee of asset or close acquaintances, was abolished in 2005. In January 2002, he filed for American citizenship and gave up on his Korean nationality.

Yoo tried to enter into Korea through the Incheon International Airport in February 2002, but was stopped on grounds of the Justice Ministry’s decision, and could not cross the immigration inspection line. He stayed at the airport for six hours and then flew back to the United States. He was allowed to stay in Korea for three days in June 2003, for the funeral of his fiance’s father, and has not been in Korea ever since. He married his fiance in the United States in 2004, and has been pursuing a singing and acting career in China since then.

In May 2015, he took to an online video broadcasting platform Afreeca TV, where he knelt down and shed tears saying “I give my sincerest apologies.”

“If you forgive me and give me a chance to step back on Korean soil again, I would like to make amends for my wrongdoings in any way possible,” he said. Minutes later, he was caught swearing during the broadcast because the microphone hadn’t been turned off.