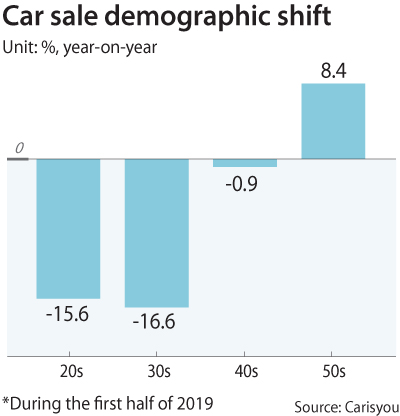 Korean millennials’ “you only live once,” or YOLO, approach to spending is not just about expensive meals out or the latest gadgets. Some consumers in their 20s and 30s are also willing to spend huge amounts on a fancy car, regardless of how modest their home is.

But as money gets tighter, the latest BMW or Mercedes-Benz is not necessarily in every 20-something’s price range. For many cash-strapped young consumers, leasing a car or going secondhand could be a much more affordable option.

According to the Carisyou data research center, which estimates car purchases based on vehicles registered with the Ministry of Land, Infrastructure and Transport, the number of cars that people in their 20s to 30s purchase is consistently decreasing. During the first half of this year, the age-group purchased 162,188 new cars, down 16.4 percent from last year’s 193,963.

The number of cars being bought by millennials has long been attributed to the YOLO attitude, the idea that you might as well spend money on the things you want now because saving for an uncertain future is fruitless.

The trend of buying expensive cars to appear wealthier than you actually are has even led to the coining of words like “carpoor,” describing drivers struggling to pay for pricey vehicles despite their modest income.

However, in 2018, the number of new car purchases from younger drivers fell dramatically.

“There are not enough jobs for young people, and even those that do get jobs consume less because they think the future economy is unpredictable,” said Lee Jung-hee, an economics professor at Chung-Ang University.

This year, economic indicators in Korea have reached a critical level. Exports have declined for seven months in a row, while the average operation rate of manufacturing facilities totaled 71.7 percent in May, the lowest point since the Asian financial crisis in 1997.

Facing a difficult economy, more and more young people are struggling to find jobs. According to Statistics Korea, the youth unemployment rate in June totaled 10.4 percent, up 1.4 percentage points from the same period last year. This is the highest June figure since 1999.

But this hasn’t stopped young drivers from getting their hands on cars.

Lately, young Koreans have increasingly turned to buying used cars that are cheaper than new vehicles. According to K Car, a domestic company that sells and buys used cars, millennials accounted for 45.2 percent of used car purchases in the first half of this year, up 1.1 percentage points from 44.1 percent last year.

Another factor that has influenced the changing consumption patterns is the rise of services that offer alternatives to owning a vehicle.

Imported car companies now offer services that allow drivers to rent a variety of vehicles for a certain period of time with regular monthly fee. They include Volvo’s premium subscription service “Care By Volvo” and BMW Mini’s “All the time mini.”

An increasing number of young drivers are also using car-sharing services. Last year, the share of millennials among users of Green Car, a car-sharing company, amounted to 85 percent.