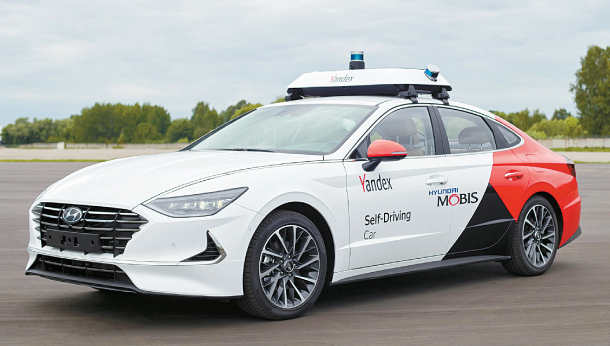 Hyundai Mobis unveiled Thursday a self-driving taxi vehicle that it developed through cooperation with Russia’s Yandex.

The auto-parts maker said that it plans to test the self-driving vehicle in Moscow soon and hopes to roll out 100 self-driving taxis across Russia as part of its trial service by the end of the year.

The announcement comes after the two companies signed a memorandum of understanding to develop the mobility service in March this year.

Mobis said that the two companies used Hyundai Motor’s Sonata sedan for development and achieved a completely self-driving platform in six weeks after the start of the collaboration.

Mobis has provided the sensors and control systems required for the self-driving platform, while Yandex has worked on applying a self-driving algorithm on the platform.

Yandex, which operates the dominant search engine in Russia, is an important player in the ride-sharing and ride-hailing business.

The company merged its ride-sharing service with U.S.-based Uber last year and reported a rapid increase in utilization since the combination.