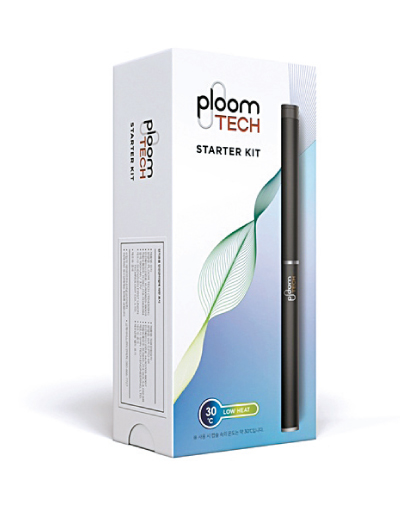 Ploom Tech combines a liquid e-cigarette with a heat-not-burn device.

The vapor coming from the heated liquid cartridge will move through a capsule that contains tobacco leaves, on a low heat of 30 degrees Celsius (86 degrees Fahrenheit).

KT&G’s lil hybrid, which is also used with a liquid cartridge and cigarette sticks at once, is the device closest to Ploom Tech. Its heating temperature is higher at 160 degrees Celcius.

Other heat-not-burn cigarettes on the market do so at between 200 and 300 degrees Celcius.

Its long-lasting battery is another strength point: On a single charge, the device can last until an entire refill pack is consumed.

The Ploom Tech starter kit, composed of a battery, a USB charger and an adapter, is offered at 35,000 won ($29.80) and will be sold at tobacco retailers and GS25, 7-Eleven, Ministop and CU convenience stores from next week.

For refills, a “Mevius For Ploom Tech” package, worth 4,500 won per unit, will be composed of five tobacco leave capsules and one liquid cartridge.

The cartridge will come in three flavors.