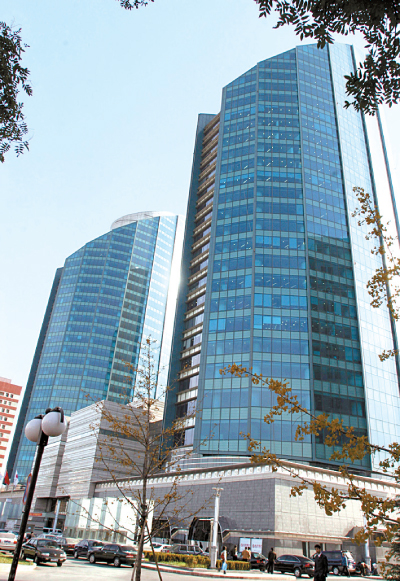 LG is scrambling to sell off its China headquarters as it unloads assets to raise funds for investment in promising growth areas.

According to investment banking sources, the fourth largest chaebol by assets is seeking buyers for the LG Beijing Twin Towers, a 30-story, twin tower on Jianguomenwai, Chaoyang District, Beijing.

The funds generated from the sale will be used to acquire a company with growth potential, the sources noted.

LG Holdings - a 49-percent-owned Hong Kong-incorporated subsidiary of LG Electronics and 100-percent owner of the Beijing property - has named an international broker for the transaction.

LG spent $400 million to complete the 148,500-square-meter (1.6-million-square-foot) building in 2005. The structure is one of the first to be built in the central business district by a foreign enterprise.

LG group companies, including LG Electronics and LG Chem, use around 20 percent of the building’s space. The rest is being occupied by Chinese and multinational firms.

LG Electronics has sold its water treatment business, LG Chem its glass plate and polarizing plate business and LG U+ its payments business.

LG in February decided to sell LG Fuel Cell Systems, a fuel cell subsidiary, in which several other subsidiaries jointly invested. The fuel cell firm is owned by LG Corp., LG Electronics, LG Chem and LG CNS. A total of 500 billion won had been invested in the hydrogen business, but little was achieved.

“We are considering various measures to effectively manage our asset,” said an LG spokesman, “but nothing has been confirmed yet.”