Denuclearization not so simple a trade-off, says Choi

Denuclearization not so simple a trade-off, says Choi 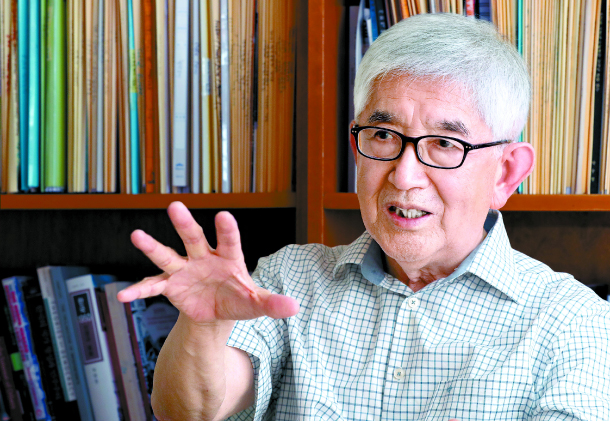 Many expect North Korea to reform and open its economy once it settles to denuclearize. This is the future that U.S. President Donald Trump proposed to North Korea leader Kim Jong-un at the U.S.-North Korea summit in June 2018.

“[Many consider] the reform of North Korea and the opening of its economy as almost a natural consequence [of the settlement of denuclearization], but I am skeptical of this,” said Choi Jang-jip, a well-known scholar in Korean politics and a progressive.

Choi rejects the idea that the North-U.S. relationship will be normalized after denuclearization talks end and that North Korea will reform and open the economy following this.

Instead, he views reform and opening of the economy as not an automatic process but as another decision-making process. He recently wrote an article in line with this position.

Choi saw that there were common features between China and Vietnam. That is, there are similar qualities between Chinese reform and opening of the economy under Deng Xiaoping and Vietnam’s Doi Moi that was adopted by the Communist Party of Vietnam in 1986.

First, after the death of powerful leaders — Mao Zedong and Le Duan — the inflexibility of communist regimes was relaxed. Second, as a result, the pressure to develop the economy came from the bottom up. Third, after the complete reformation of the economy, people started asking for more freedoms, for a more flexible authoritarian system or even for democratization. He added that big changes in the economy occur when the foundations of power change. He said that before analyzing whether something is feasible in economic terms, it is more important to look at whether there is enough political power or the political foundation [needed to achieve economic change].

The JoongAng Ilbo met Choi, currently a professor emeritus at Korea University, at his office in Gwanghwamun, central Seoul, on June 26 before the summit between North Korea and the United States took place on June 30.

During the interview, he emphasized that reform and opening the economy threatens the power of the North Korean regime, and questioned whether North Korean leader Kim Jong-un and his military forces will accept it.

Even if North Korea opens its economy, he projected that it will not be the same reform as Vietnam. Rather, he believes that the United States could acknowledge North Korea as a nuclear power.

Below are edited excerpts of our conversation.

Q. Why do you think the Kim Jong-un regime is unable to do this?

A. North Korea is able to be a regime under an absolute power, Kim Jong-un, where he alone can decide everything.

However, a group of people that veto [his decisions] might exist. This group includes officials such as military authorities, political bureaucrats and the nuclear division, which emerged from the country’s nuclear development in the 1990s.

If this is the case, progress toward and the extent of denuclearization could be very slow and incremental. Even though negotiations settle to some extent, how could these forces choose and support the complete reform and opening of the regime?

If the regime is completely under Kim Jong-un’s control, would things change?

The most important factor is whether North Korea has the political foundation to reform or have a groundbreaking idea like Deng Xiaoping.
North Korea should also maintain the hereditary regime under Kim [in order to keep its power]. Absolute power is necessary.

After socialism was demolished in Eastern Europe, North Korea chose nuclear armament as an alternative. Although it suffered extreme poverty, it did not prioritize economic development. North Korea’s economy is almost nearing absolute poverty.
Although Trump, and Korea’s policymakers and political leaders hope [for the success of] South Korean aid and the building of social overhead capital like railroads in North Korea, I believe it is completely unrealistic.
I think North Korea will not accept South Korea influencing its own country because North Korea would have far less control over its own country.

Is that the case even if denuclearization happens?

The North will partly open the door as they have to survive, but I believe that it cannot completely open like Vietnam or Deng Xiaoping.

For North Korea, it will have no reason to give way in the negotiation.

Do you mean our way of approaching North Korea should change?

I believe that trying to understand North Korea by projecting hope and trying to predict its policies is unrealistic. Facing reality is a must.

Immediately after the interview, there was another U.S.-North summit at Panmunjom on June 30. Regarding the third meeting between Trump and Kim Jong-un, President Moon Jae-in said that the action declares the end of animosity and the start of a new, peaceful era. The JoongAng Ilbo called Choi again.

“That is why I cannot predict North Korea’s reform and am skeptical of its possibility. The threat that North Korea will face is neither about survival or security issues nor whether it will be admitted in the international society in the process of becoming a nuclear power. Its biggest task is how to achieve minimum economic development and survival conditions for its people.”