Japan accused of ‘hypocrisy’ with documents

Japan accused of ‘hypocrisy’ with documents 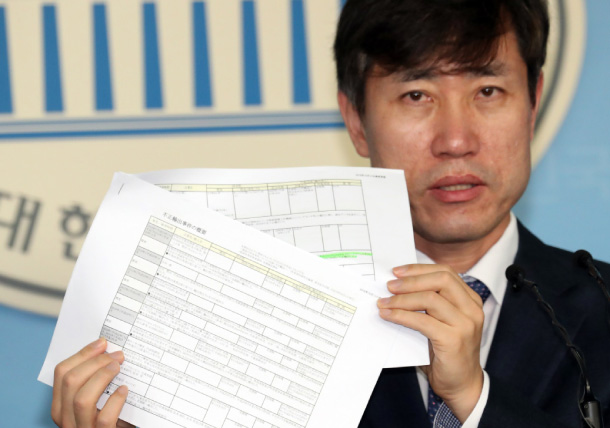 A South Korean lawmaker turned Tokyo’s accusation on its head Thursday by revealing documents suggesting Japan had, in the past, covertly exported strategic industrial materials to North Korea that can be used to develop chemical or nuclear weapons.

Ha Tae-keung, a lawmaker from the minor opposition Bareunmirae Party, said at a press conference at the National Assembly that he obtained documents from Cistec, Japan’s Center for Information on Security Trade Controls, that showed there were over 30 cases of unsanctioned exports from Japan to North Korea between 1996 to 2013. Among the items allegedly shipped to the North were dozens of kilograms of hydrogen fluoride and sodium fluoride, which can be used to make toxic gas such as sarin.

The revelation came days after Tokyo publicly raised accusations that industrial material exported to South Korea from Japan could be making its way to the North, where it may be deployed into Pyongyang’s chemical or nuclear weapons. After similar suggestions were made by Japanese Prime Minister Shinzo Abe on Sunday to justify his administration’s recent economic restrictions on South Korea, a Tokyo official told the country’s public broadcaster NHK on Tuesday that such materials may be used by Pyongyang to produce sarin gas.

Last week, Japan announced tighter restrictions on exports to South Korea of three key materials used in semiconductors and displays, including fluoride polyamide, photoresists and hydrogen fluoride, escalating a diplomatic row between the two countries over court-ordered compensation for Japanese companies’ use of Korean forced laborers during World War II.

But according to the documents revealed by Ha, who sits on the National Assembly’s National Defense Committee, direct shipments of the chemicals in question had been sent to the North from Japan without going through South Korea. A Japanese company allegedly shipped 50 kilograms (110 pounds) of sodium fluoride illegally through Osaka, Japan, in January 1996, and again that February, when 50 kilograms of hydrogen fluoride apparently left Kobe, Japan, for North Korea.

Notes in the documents detailing the exports added that the shipped materials had been smuggled through North Korean vessels officially designated to send emergency rice shipments.

In addition, the documents also showed a Japanese company selling three devices to stabilize electric power supply to North Korea through Thailand in April 2003 despite receiving a notice from Japan’s Ministry of Economy, Trade and Industry that exports of such items to the North required authorization since they could be employed to enable Pyongyang’s nuclear program.

Cistec, which produced the documents, is a non-profit and non-governmental organization in Japan that monitors security export control issues.

After announcing his findings through the documents, Ha called Japan’s recent claims against South Korea a matter of hypocrisy and said that Tokyo should withdraw its restrictions on exports to Seoul.

“With South Korea-Japan relations hitting bottom at the moment, Japan must cease emotionally motivated responses [toward South Korea],” Ha said. “If Japan continues to make baseless accusations, it will find itself isolated from the international community.”