Lawmakers to be sent to Tokyo for trade row

Lawmakers to be sent to Tokyo for trade row 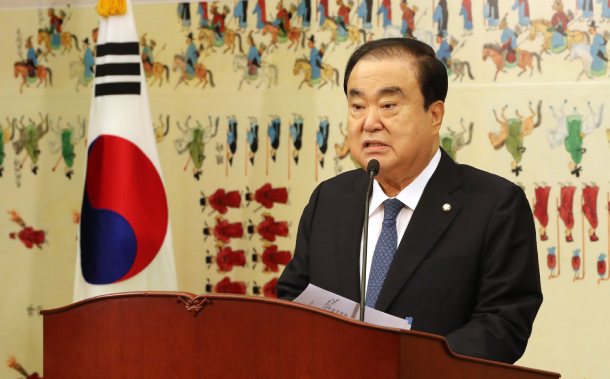 National Assembly speaker Moon Hee-sang said a delegation of lawmakers from major parties will travel to Tokyo after Japan’s upper house election, set for July 21, to spread the message that Korean politicians are unanimous in their wish to end Japan’s export restrictions.

Moon said the Assembly plans to adopt a resolution before its ongoing special session ends on July 19 to urge Tokyo to withdraw its restrictions of exports to Korea.

“Both ruling and opposition parties have a general consensus about the [Japan] issue. The parliamentary delegation will visit Tokyo late this month after the July 21 Japanese elections, if the Assembly resolution is passed before July 19,” said Moon.

“Rep. Seo Chung-won, an honorary chairman of the Korea-Japan Parliamentary Diplomacy Forum, will lead the discussion on the formation of the delegation for Japan. It will consist of seven to eight members, including leading representatives from major parties and experts,” he said in a news conference marking the first anniversary of his election as Assembly speaker.

Japan last week removed preferential treatment for the export of three key materials used for the manufacturing of chips and smartphone displays to Korean firms in an apparent protest against Seoul over its handling of the wartime forced labor issue.

Moon said it will be meaningful for the delegation to tell Japan that Korean lawmakers unanimously wish for an end to the Japanese export restrictions.

“A textbook solution is to hold government-level contacts and summit talks, but parliament cannot sit idle. I think Japan’s action is somewhat undesirable and should not have taken place. But it is not essential to start a fresh row,” he said, refraining from direct criticism of the neighboring country.

Moon then called for nonpartisan cooperation for the swift passage of a 6.7 trillion won ($5.7 billion) supplementary budget bill, which has been pending in parliament since April amid a partisan dispute due to its size.

“[Korea] is required to make a strategic choice in the face of U.S.-China trade conflict. Moreover, the Korean economy faces adverse effects from Japan’s export regulations. Thus, all parties should cooperate to pass the extra budget bill and jointly respond to an economic crisis,” Moon said.

“There should be new momentum in inter-Korean relations. On the parliamentary level, I’ll push to send a delegation to the North,” Moon said.

“I and the floor leaders [of major parties] agreed to realize the delegation idea at the earliest possible time during a meeting on July 8. We’ll also closely consult with the government on the issue and expect a positive response from the North after a formal proposal is made,” he said.

The speaker gave a positive evaluation of the recent gathering of leaders of the two Koreas and the United States at the border peace village of Panmunjom, calling it an important turning point in the Korean Peninsula peace process and a source of fresh momentum for the resumption of the North-U.S. talks.