Chinese diving duo is back on top

Chinese diving duo is back on top 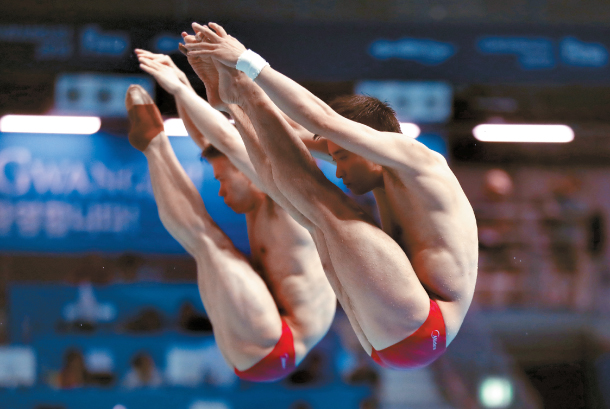 Having finished their preliminary round in first place, the duo continued their momentum in the final to pick up gold with a total score of 439.74 points.

However, it was a far closer contest than the Chinese pair would have liked.

The duo got off to a solid start by receiving a score of 51.60, good enough to place their names at the top of the leaderboard. However, by receiving one of the lowest scores of 45.00 in their second dive, the duo dropped to seventh in the standing. Due to this, Cao and Xie had to make their way up once again to regain their lead. It wasn’t until after their fourth dive that they took the top spot again.

“We were happy that we won back the synchro title after the Russian pair edged us last time at the Budapest Worlds,” Cao told FINA. “We were too eager to win and did some mistakes in the second and third dive. Then my coach told me to calm down and to focus on the pace and technical details. It helped us to cool down at the end. It was a really good competition.”

A gold at this year’s World Championships is a good redemption for the duo as they were forced to walk away with a silver during the 2017 Championships in Budapest. At the time, their runner-up finish was quite a disappointment as China had won gold in the men’s 3 meter synchronized springboard for six straight world championships, from 2005 to 2015.

With the win, Cao picked up his second gold while Xie won his third at the world championships. Prior to Saturday’s event, Cao won his first gold in the men’s 3 meter synchronized springboard back in 2015, partnering with Qin Kai.

But for Xie, this was his first gold in a synchronized event. His first two gold medals were won in the men’s 1 meter springboard and men’s 3 meter springboard during the 2015 and 2017 world championships, respectively.

Of the three medal events competed in diving on the first day, the men’s 3 meter synchronized springboard was the only official event that’ll be competed at the Olympics. Looking at the results of the three diving events on Day 1 of the World Championships, China continued their dominance as they swept gold in all three events.