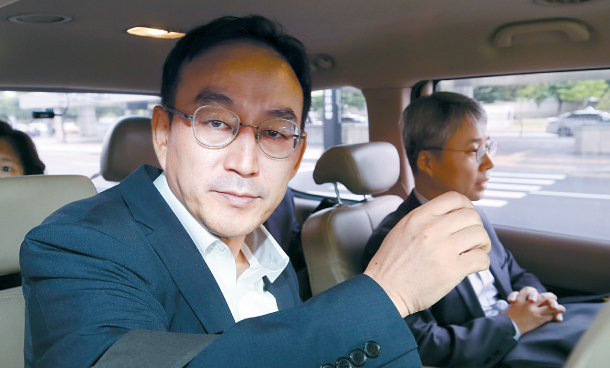 Chun Chan-soo, chief of the Ministry of Trade, Industry and Energy’s trade security division, left, travels in a van Saturday upon returning to Korea from Japan. [YONHAP]

Japan reaffirmed its intent to remove Korea from its “white list” of countries entitled to faster export processing for items related to national security.

As it is increasingly clear that the ongoing trade conflict is not going to end anytime soon, the Korean government is pushing at all levels to limit the impact the restrictions have on the country.

During a meeting between trade officials from the two countries on Friday, Japanese officials confirmed the plan to take Korea off of the list, Lee Ho-hyeon, an official at the Ministry of Trade, Industry and Energy, said during a press conference Friday night.

The delegates from Japan argued that the move was taken because Korea had not implemented catch-all safeguards to prevent the re-export of materials and products that could be used for military purposes, he added.

Korean delegates disputed the claim during the Friday meeting and said that the country already has its own export control system on weaponry. They said that it is at times superior to the Japanese standard.

Lee added that the Japanese officials did not provide any specific examples or evidence of Korea not supervising imports properly, saying the ministry regretted that the neighboring country did not give an explanation or a warning.

A total of 27 countries, including the United States, Germany and Korea, are on Japan’s white list. If Korea is taken off the list on July 24, the current deadline, exports from Japan may be restricted more than they already are. The loss of certain key materials could further weaken the struggling Korean economy.

If Korea is taken off the list, automotive, appliance and electronics manufacturing could be affected. Although the Japanese side hinted that exports for civilian use could be allowed in the future, that might take some time, the official said.

Since July 4, Japan has imposed restrictions on exports of three key materials used in semiconductors and displays - hydrogen fluoride, fluorinated polyimide and photoresists - as a response to court rulings ordering compensation to Koreans forced to work in Japanese factories and mines during World War II.

Japan insists that the matter was settled with the 1965 treaty normalizing relations.

As criticism grew that Japan was economically retaliating in what was a diplomatic spat, Tokyo later claimed that it took the measures because of a “trust” issue involving Korea not properly managing trade in strategic goods, with some Japanese politicians going as far as to hint that high-tech materials that can be used for military purposes were finding their way to the North.

In response to the accusation, the Blue House proposed Friday that an international body conduct investigations into both Korea and Japan on possible violations of international export control regimes.

As the Friday meeting suggests that Tokyo is unlikely to change its stance on export restrictions, the Korean government is working to keep the economy afloat as key imports fall. The country has been repeatedly calling on Japan to retract the measures and hold negotiations to resolve the conflict, but Tokyo has remained firm in its position.

Finance Minister Hong Nam-ki said Friday that a 6.7 trillion won ($5.7 billion) supplementary budget, currently being reviewed at the National Assembly, could be increased by at least 120 billion won to support industries affected by the restrictions. The ruling Democratic Party suggested Thursday raising the budget by 300 billion won.

Officials said Sunday the government is also looking into providing tax benefits for research and development (R&D) into the making of hydrogen fluoride, one of the first three materials restricted by Japan.

The government may also extend the tax benefits beyond hydrogen fluoride, possibly to companies investing in semiconductor manufacturing technology.