The rockish sounds of DAY6 are back: Ahead of a world tour, the band releases an EP that reaffirms their un-pop cred

The rockish sounds of DAY6 are back: Ahead of a world tour, the band releases an EP that reaffirms their un-pop cred 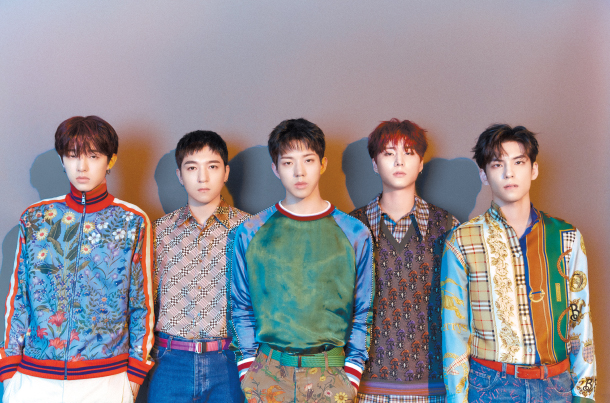 DAY6, one of the few true rock acts in the K-pop world, is getting back to basics. After taking a bit of a detour with its last album, the five-member band is ditching the light and likeable and returning to the classic sounds that made it what it is.

The rediscovery comes in the nick of time, as the band is headed into a world tour in just a few weeks and is scheduled to play its largest venues ever.

“The Book of Us: Gravity,” the band’s fifth EP, has six new songs, all of them written by the members, and is being released more than half a year after the band’s last EP.

While DAY6’s edge is returning, it is all served up with a customary dose of fan-friendly humility, suggesting that the rocker outliers will always stay true to their K-pop roots.

“This is our first work for this year,” said Sungjin at an interview conducted on Thursday prior to the album’s release on Monday. “It’s been such a long time that it almost felt like starting anew. We’ve been looking so forward to this moment, and also excited. I couldn’t say that we’re not worried, but I hope it still leads to good results.”

“Gravity” comes seven months after “Remember Us: Youth Part 2,” the band’s fourth EP, which came out in December last year. That album was trendier and more accessible than DAY6’s usual fare.

While all the members took part in either writing the music or the lyrics for all of the tracks in the EP, member Young K took the lead in writing the lyrics. Member Sungjin helped with “Pojang,” but Young K was the mastermind behind the emotional lyrics of all the other five songs, including the lead “Time of Our Life.” According to Young K, “Time of Our Life” is a song that will pull the listeners into the song, much like gravity.

“The song is about how a couple comes to start their relationship,” he said. “We fused chords that give off a very eastern mood and the album’s art, that utilizes very bright and colorful hues that give off a western vibe. And together, they make up the perfect mood for the summer.”

Sungjin described the song as being “refreshing, like giving us the energy to run somewhere - fit for the summer vibe.”

While the members credited Young K’s talent as the reason he guides the band’s music, Young K remains humble and says that everyday he is inspired by something in his life.

“I think the style of my lyrics have become much different from how they were from when I first debuted,” Young K said. “But when I went back and listened to them, I found that the songs that I had exaggerated on, or wasn’t sincere on, sounded kind of awkward later on. When I was honest about what I was really feeling inside, that’s when the songs came off as good.”

He added, “I tend to use the word ‘beautiful’ a lot. And there are other expressions that I use often as well. So I go over every song that I’ve wrote in the past to make sure that I don’t use what I’ve used before. It’s not about talking around something and choose the second option: it’s about delivering how I feel in a different way.”

Sungjin agreed, and revealed his habit he has acquired while learning to write lyrics.

“I tend to get ideas from my routines, the everyday conversations I have or the things I see around me. I make note of everything that comes into my head. And I agree that lyrics should be candid, so that they don’t come across as ‘too much’ to the listeners. So I look at what I’ve wrote down, then again and again to make sure that I get rid of such parts,” said Sungjin.

On Aug. 9, DAY6 will kick off its world tour series, also titled “Gravity,” with three concerts at the Jamsil Arena, southern Seoul, over three days.

The venue is the biggest ever for the band, which debuted in 2015. The concert marks the beginning of tour series that will have the members flying to 26 cities worldwide for a total of 31 performances.

“The set list of songs that we will be playing during this tour is longer than ever. We’ve prepared so much for it, and it will be much different from the tour last year,” Young K said.

“We have been dreaming about this even before we made our debut, and we’re just so grateful to see that it’s actually happening,” Wonpil said. “Whenever the foreign fans sing along to the Korean lyrics, I just feel so touched. It’s such an honor. I just wish I could become better at English for them.”

The growing size of the concert stages is seen as proof positive that DAY6 is growing, and the band’s fan base getting bigger along the way. And what makes DAY6 increasingly appealing to the fans?

Sungjin attributed it to the different voices of the members, which are all very distinct from each other but at the same offers a touch of harmony that can’t be heard from any other band in Korea.

“Our voices are the core of our music,” Sungjin said. “When we’re singing a happy song, our voices add an emotional touch. And even when we’re singing something sad, there’s this touch of uplifting energy in it. It’s ambivalent, and that’s what makes our music our own.”

Now that the band is performing at its biggest venue yet, the members are grateful for every single fan and event they are able to book. While all the love from their fans may come across as a burden sometimes, DAY6 use that pressure to keep motivated to repay their fans with good music.

“As we get bigger, and the stages get bigger, that does come across as burdensome,” said Dowoon. “We know that just as we get bigger, we need to do better. But that’s a good thing, because it means we’re improving. And at the end of the day, what we always have in our minds is that we can only do our best regardless of which stage we’re on.”

Sungjin added, “We want to make our fans proud. Fans say that they trust that our songs will always be good, and I don’t want to let go of that.”