One in 5 in Korea have a Kakao Bank account

One in 5 in Korea have a Kakao Bank account 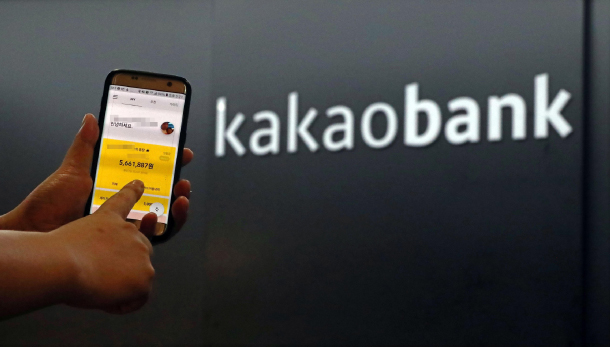 Kakao Bank had 10 million customers as of Thursday night, less than two years since the country’s second online bank opened for business.

The bank previously said the 10 million mark would be broken later this week.

Most of its clients are younger people, with 40 percent of them in their 20s and 30s.

The 10 million mark means that Kakao Bank is the second-largest online bank globally. Only China’s WeBank has more customers, with 114 million.

Britain’s Revolut, which has been in service since 2015, has four million subscribers, and Germany’s N26, which also started in 2015, has two million. Japan’s Rakuten Bank, which was founded in 2001, has 7.32 million.

“The biggest question that we get when attending overseas forums is how, in just two years, we were able to have nearly 10 million customers for a country with 50 million people,” said a Kakao Bank official.

Kakao Bank was cited in a recent McKinsey & Company report on the Asia-Pacific banking industry. The consultancy was highlighting how digital platform companies are quickly challenging the sector landscape by eating into the market share of traditional banks. 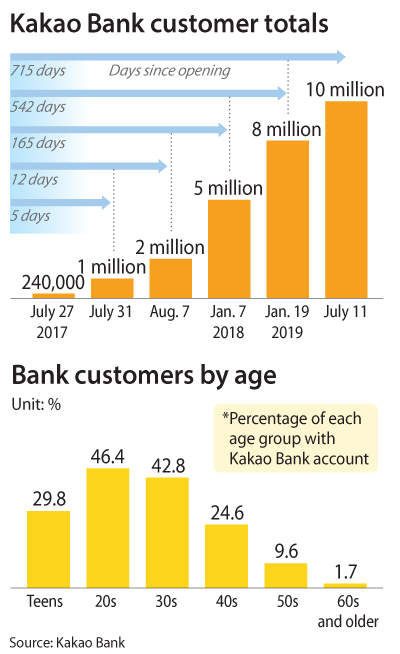 Kakao Bank’s cards with Kakao characters are often credited with attracting customers when the online bank was launched. [KAKAO BANK]

From the get-go, Kakao Bank was destined to be a disruptor. A remarkable 240,000 people signed up on the first day.

Kakao’s popular characters - such as Ryan and Apeach - are largely credited with the rush, so much so that the early uptake was written off by some as being a temporary fad driven by notoriously fickle fans.

The numbers told a different story, one of sustainability that cannot be explained away by the cute and trendy. Customer numbers hit five million in 165 days. The inflow of new customers started to slow, and in June 2018 the average daily sign ups fell to 3,415.

At the end of June last year, the bank introduced a “26-week deposit” product that helped further drive demand. And in December, it succeeded in drawing in an average of 13,000 customers daily with its “Moim account.”

The “Moim account” is a joint-account service whereby a community of friends or colleagues opens an account, each contributing a certain amount, which can later be used for various activities, such as parties. In just seven months, 2.85 million users signed up for these accounts.

The online bank continues to roll out new products. In March, it started a stock exchange account, and in April it introduced a loan service that is linked to a nonbanking financial institution.

“We are focusing on creating financial platform services that attract customers and connect them,” said a Kakao Bank official.

In a survey the bank conducted in May, the top reason given for subscribing to financial services at the online bank is the low commission rate (35.9 percent), followed by convenience (25.6 percent) and the higher deposit rates (12.8 percent).

Co-CEOs Lee Yong-woo and Yun Ho-young, while appreciating the achievement of reaching 10 million customers even though the bank opened less than two years ago, said in a statement that the bank will continue to focus on coming up with more innovative products.

In the first quarter, the online bank turned around from red to black, and the second quarter was probably profitable.

The local financial industry says that if Kakao Bank is to remain in surplus, it needs to go public next year. It estimates Kakao Bank’s will be worth 2 trillion won as a public company.

But in order for the online bank to succeed in an initial public offering, it first needs to succeed in getting the regulatory approval to make Kakao its largest stakeholder.

The Financial Services Commission has revised the law, saying that IT companies can increase their stakes to 34 percent. At present, Kakao is the second largest shareholder of Kakao Bank. It hopes to receive approval by the end of the month to increase its shareholding.