[Test Drive] A family SUV with LPG under the hood

[Test Drive] A family SUV with LPG under the hood 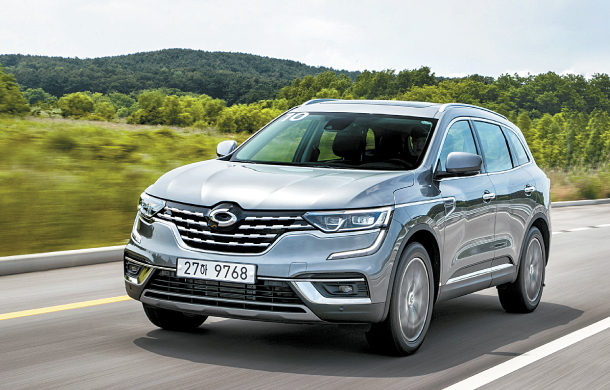 As Renault Samsung has just closed a tough wage deal with its labor union, it is hoping the new model will help its fortunes turn. The carmaker showed its ambition by announcing it plans to sell 3,000 of the LPG-fueled SUVs per month during a launch event last month.

When the Korea JoongAng Daily got behind the wheel of the SUV on June 18 on a roughly 130-kilometer (81-mile) round trip route between Seoul and Incheon, it was hard to tell whether it was actually an LPG-powered vehicle. The SUV also comes in a gasoline trim, and the driving experience was so similar that this reporter had to double check with the organizers that they’d definitely provided the LPG model.

The car was quiet, smooth and accelerated well on highways without much difficulty, clearing any early concerns that an LPG-powered car would be less powerful than gasoline engines. 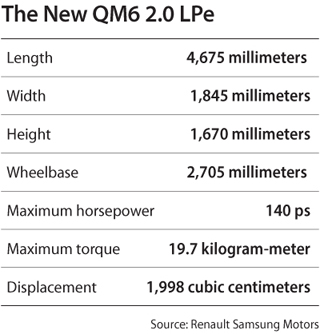 The car easily accelerated to 100 kilometers per hour (62 miles per hour) on Incheon Bridge without any disturbing noise or too much effort required from the foot on the accelerator.

Of course, the satisfaction of the driving performance really depends on what the driver is expecting. Good acceleration does not necessarily suggest an especially powerful car.

The QM6 SUV is not really known for offering a sporty and dynamic driving experience in the first place. Potential drivers are likely to be looking for a family car for safe travel or everyday commuting in urban areas. For them, the LPG trim would be just fine. Plus, the fuel is cheaper and greener than other fuel options. As of Thursday, the average gasoline price in Korea was 1,490.29 won per liter ($4.80 per gallon) while the average LPG price was only 796.29 won per liter, according to data from the Korea National Oil Corporation.

The LPG model doesn’t offer the best fuel-efficiency, but LPG cars incur about 30 percent less fuels cost when moving the same distance compared to gasoline cars, according to the Korea LPG Association.

Aside from the driving performance, the exterior hasn’t changed much from the previous version of the QM6 launched three years ago. The automaker said it upgraded the front grille and fog lamp design but the difference is barely noticeable at first glance.

Inside of the car, the 8.7-inch vertical screen stood out. The screen looks like a seriously cool piece of kit, but it was surprisingly complicated to handle.

The carmaker boasted that air conditioning can be controlled in detail through the screen, but it was difficult to manipulate while driving because there were many options regarding wind strength, temperature, directions and so on. It won’t be a problem once drivers get used to the system, but for first-time users, the infotainment system and pre-installed navigation didn’t seem very intuitive.

While the front seat was wide and comfortable, the back row didn’t seem that roomy for a midsize SUV. When this reporter, about 164-centimeters (5-foot-3) tall, sat in the back, knee-room seemed tight. To make things more comfortable, the carmaker has added reclining features to the backseats, allowing them to tilt by up to 32 degrees in all trims, according to the automaker.

Along with the QM6 LPe, reporters were offered a chance to ride the QM6 GDe Premiere. It is a premium-version of the gasoline-powered QM6. The newly adopted label will be used on Renault Samsung’s top trims of the QM6 and SM6 sedan from now on, the automaker said. The Premiere logo will be added onto the grille and door for differentiation, and the interior is clearly more luxurious. The quilting on the seats is high-quality, both in terms of design and comfort. The car is also quieter as it has special sound-insulating glass windows.