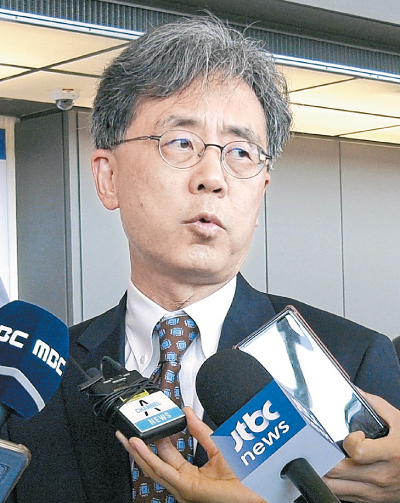 The United States strongly agrees that a diplomatic row between Korea and Japan is not helping the three countries’ partnership in the region, said a Blue House envoy dispatched to Washington to seek its intervention in the dispute.

“I’ve met and explained to officials of the U.S. administration, Congress and opinion makers like think tank [experts] of the iniquity of Japan’s unilateral measures and the effects they may have on the security situation of the three countries,” Kim told reporters at Dulles International Airport in Washington.

“All those I met understood the seriousness of the rift between Korea and Japan as a result of these measures and there was a consensus on that account.”

Kim was not the only Korean official dispatched to the United States this week to share Seoul’s position on the issue. The Foreign Ministry also sent its Deputy Minister for Economic Affairs Yun Kang-hyeon, as well as Kim Hee-sang, director-general for bilateral economic affairs, to Washington for talks with U.S. State Department officials.

While U.S. officials have not expressed an interest in stepping in to mediate the dispute, Kim stressed that the purpose of his visit was not to seek U.S. mediation nor did he use that term in the discussions. He added that if “the U.S. feels cooperation […] and the alliance relationship between Korea, the U.S. and Japan are important, [it] will do what is needed on its own.”

The envoy also expressed discomfort with comments made by the U.S. Ambassador to Korea Harry Harris to a Korean opposition lawmaker on Friday, in which Harris said “now is not the time” for Washington to arbitrate and that moves would only be made when various other options had been exhausted. Calling into question the timing of Harris’s remarks, Kim added that the ambassador “could have made a better expression” of the United States’ official stance.

Despite Seoul’s displeasure with Washington’s indifference, Harris’ words may reflect the reality of the Trump administration’s position regarding the dispute between its closest East Asian allies.

Following his meeting with Matthew Pottinger, the White House senior director for Asian Affairs, and Peter Haas, principal deputy assistant secretary in the Bureau of Economic Affairs, Deputy Minister Yun told reporters that the United States does not appear ready to adjudicate between its allies due to the sensitivity of the issue.

In addition, according to Kim, Trump’s acting chief of staff Mulvaney had said it was up to the two parties to “constructively resolve” the dispute - an implication that Washington would not involve itself.

The U.S. capital in recent days has been the site of heated competition between Seoul and Tokyo to elicit support from power brokers in the U.S. government. According to diplomatic sources, the Japanese mission - led by Tokyo’s ambassador to the United States, Shinsuke Sugiyama - has been holding parties at the Metropolitan Club, a private social club in New York City, and other venues attended by influential figures in the United States.

Sugiyama is also rumored to share a close communication channel with Mulvaney thanks to the frequent personal exchanges that took place between U.S. President Donald Trump and Japanese Prime Minister Shinzo Abe.

By contrast, Korea has been unable to muster together a comparative level of influence in Washington.

Sources in the diplomatic corps say Seoul’s diplomats were demoralized after the Blue House ordered the punishment of an official in Washington for leaking the contents of a private phone conversation between President Moon Jae-in and Trump in May. The Foreign Ministry sacked the diplomat for leaking the classified discussion to an opposition lawmaker.

The ministry’s decision to fire the diplomat may have created a problematic precedent for working level diplomats, since it was customary for diplomatic workers to be aware of sensitive content like high-level discussions between leaders.