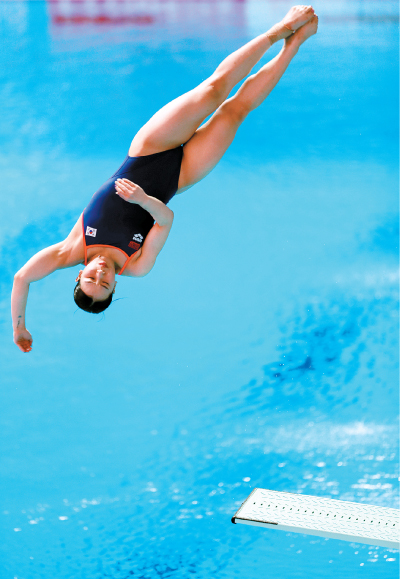 She may not have taken gold, but Kim Su-ji still made Korean diving history on Saturday.

By receiving a total score of 257.20, Kim won Korea’s first medal at the 2019 World Championships in the women’s 1 meter springboard at Nambu University Municipal Aquatics Center in Gwangju.

Kim’s bronze came as a surprise, as not many Korean fans expected to see a medal in diving. The sport has been dominated by China in recent years, and Korea hasn’t been considered a powerhouse when it comes to aquatic sports. Due to this, aside from swimming, where Park Tae-hwan used to be a solid medal contender, aquatic sports received almost no attention from local fans.

But diving could just be the latest must-watch sport for Korean fans.

With a podium finish, Kim became the first Korean diver to win a medal and the first athlete since Park in 2011 to medal at the world championships.

“This is incredible. I am so honored,” Kim told Yonhap. “Diving isn’t really popular in Korea, and I haven’t been getting a lot of attention. Hopefully, people will start following diving more closely after my medal.”

Kim got off to a solid start by receiving a score of 55.20 in her first dive, good enough to take third place. By receiving a score of 57.20 in her second dive, Kim moved up a spot to second. She held onto second place until the very last dive, when she recorded her lowest score of the competition, 47.30, to slip into third place. Sarah Bacon of the United States scored 55.90 on her last dive to overtake Kim with a total score of 262.00.

Chen Yiwen of China dominated the field with a total score of 285.45.

“I don’t watch the scores during competitions because I want to just concentrate on my own performance,” Kim was quoted as saying on the Yonhap website. “I sort of took a peek and knew I was in second place at some point, but I didn’t know I’d won a medal until I was done.”

Now that Kim has already made history, she is hoping to win a berth at the Olympics. At age 14, Kim was the youngest Korean to compete at the 2012 London Olympics. Since London, she hasn’t earned a spot at the Games. This year, she is more determined than ever to earn a chance to compete in Tokyo.

As 1 meter springboard isn’t an official Olympic event, Kim hasn’t qualified for the Tokyo Games just yet. Throughout the World Championships, a total of 13 diving events are being held. Only eight of those are qualifiers for the 2020 Olympics.

In synchronized events, only podium finishers qualify for the Olympics, while the 12 divers that advance to the finals in individual events qualify.

“I know winning this medal will absolutely motivate me for the 3 meter springboard,” Kim said. “It’s a whole different animal. It’s so much more difficult than the 1 meter event. It’d be nice to win a medal there, too, but for now, I’ll try to make the final.”

By receiving a total of 406.15, Woo finished 34.10 points behind the gold medalist Wang Zongyuan.

“I am disappointed that I didn’t win a medal, but I saw plenty of promise,” Woo said.