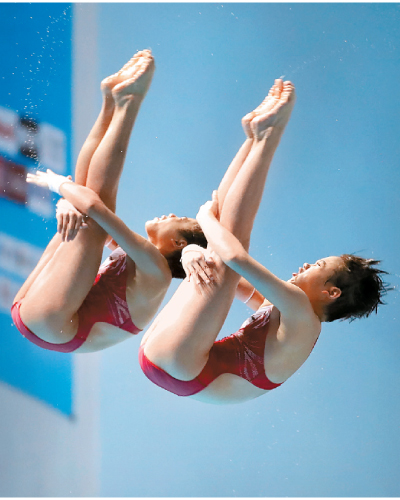 After finishing the preliminary round in first place with a score of 317.82, the pair continued to excel in the final, receiving a total score of 345.24 to pick up a gold.

The pair started off the final with a score of 50.40 for their first and continued to receive higher and higher scores over the course of the event.
The win continues China’s dominance in diving, and is the country’s fifth gold medal in the sport at this year’s World Championships.

The win is both Zhang and Lu’s first world championship gold, and the future looks bright for the youngsters — Zhang is 15 and Lu is 13.

Early in her career, Zhang is already off to a great start. She’s already won two golds — one in women’s 10 meter platform and another in women’s 10-meter synchronized platform — at the 2018 FINA Diving World Cup in Wuhan.

“We did make two big mistakes in the easy dives this morning,” Zhang told FINA. “So we took time to check out the problems through video. We improved in the final and we won the gold. It was the first worlds for both of us — we were very nervous indeed. We encouraged each other before and after each dive. That helped us a lot.”

The pair has been diving together since the end of last year and they’ve been doing well together ever since, winning events in Sagamihara, Japan, and in Beijing as part of the FINA Diving World Series this year. During the third stop in Montreal, the pair added a bronze in the event, and Lu picked up a gold in the women’s 10-meter platform.

“We became a synchro pair at the end of last year,” Lu told FINA. “We try to practice being in sync as often as possible. I will compete in both individual and synchro in Gwangju. I hope the synchro title can boost my confidence in the individual.”