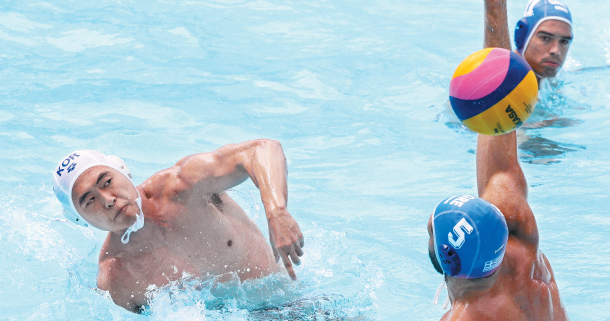 Kim Moon-soo of Korea, left, scores the team’s first goal against Greece in the men’s water polo Group A match at the FINA World Championships held at the Nambu University Water Polo Competition Venue in Gwangju on Monday. [YONHAP]

Korea dropped its opening men’s water polo match against Greece 26-3 at the FINA World Championships on Monday, a score that belied the losing side’s strong push in the second half.

Kim Moon-soo scored the historic first World Championships goal for Korean water polo midway through the third quarter, and Kim Dong-hyeok picked up two goals in the fourth. But they weren’t nearly enough against the Greek onslaught that spoiled the host nation’s debut at Nambu University Water Polo Competition Venue in Gwangju.

The men’s performance followed a debacle in the women’s tournament Sunday, when Korea was destroyed by Hungary 64-0.

On paper, this had the makings of a lopsided contest. Korea only received its place in this year’s tournament as the host country.

Greece finished fourth at the previous World Championships in 2017, and it returned eight of the players from that team.

Greece got on the board just 70 seconds after the opening whistle and built a 3-0 lead less than three minutes into the contest.

At around the halfway point in the eight-minute first quarter, Korea had a goal wiped out because of an offensive foul, and Greece came right back with a goal to take a 4-0 lead.

Greece kept piling on and pulled away to a 7-0 advantage at the end of the opening frame. Goalkeeper Lee Jin-woo made a couple of impressive saves early, but he was often left hung out to dry by the porous defense in front of him.

Korea had some decent looks on the offensive end in the second quarter but still ended the first half down 14-0.

Lee Seong-gyu fired a hard shot right at backup goalkeeper Konstantinos Galanidis in the opening moments of the third quarter, and with 4:18 left in the frame and Korea down 15-0, Kim Moon-soo finally put one into the Greece net.

After holding Greece to three goals in the third quarter, Korea nearly got a second goal early in the fourth, when Han Hyo-min hit the crossbar from distance.

Korea continued to get after it in the final quarter, and Kim Dong-hyeok netted the second Korean goal with 3:50 left in the game to make it 23-2.
Kim got his second goal of the game 42 seconds later, much to the delight of partisan fans who didn’t seem to care that their team was still trailing by more than 20 goals.

Korea had 19 shots on net, compared with 36 by Greece. Korea failed to solve starting keeper Emmanouil Zerdevas in the first half but beat Galanidis three times on 10 shots.

Three Greek players tied for the team lead with four goals apiece, and nine different players found the back of the net for the winning side.

There are four groups of four teams, and the top seed from each group will advance directly to the quarterfinals. The No. 2 and No. 3 seeds will battle for the remaining quarterfinal spots in the playoffs, while the last-ranked teams will be relegated to the ranking playoffs.

Korea will next play Serbia, the 2017 bronze medalist, at 8:30 p.m. Wednesday, followed by Montenegro, which finished fifth two years ago, at 5:50 p.m. Friday.

Serbia has brought back five players from the 2017 team, and Montenegro has eight returning players.