Who triggered the chip crisis?

Who triggered the chip crisis? 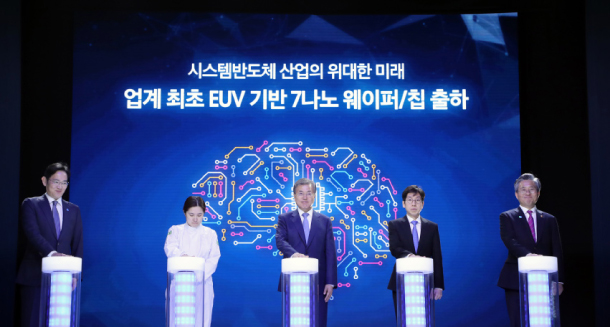 PARK TAE-HEE
The author is an industrial 1 team reporter of the JoongAng Ilbo.

Consumers think semiconductors are just high-tech parts for IT devices, but researchers and developers feel differently. Semiconductor researchers quietly and diligently develop products for unexpected releases. They thoroughly prepare for successful developments and surprise the world.

In fact, when Samsung Electronics discusses new products, its press releases simply say products were merely “developed.” Actually, this is a confidentiality issue. While Samsung Electronics has maintained the top spot for 27 years in the memory chip sector, it has never hosted a large-scale event or presentation. It has been quietly — and diligently — developing its products for surprise releases.

As Japan started imposing export restrictions on its semiconductor materials, many people in the industry looked back on that event. An insider in the business said that Samsung should have quietly enhanced its non-memory competitiveness following success in the memory sector. However, when it announced its plan to the whole world, it also irritated rivals, he said.

The United States wants to reorganize the global technology hegemony, and Japan only sold materials after conceding its first place in memory to Korea. China wants to rise in the semiconductor field and beat Korea. Taiwan is worried about TSMC, the world’s top foundry maker. The Korean government and Samsung Electronics showed their card first. They also reminded others where it would hurt most in political and industrial terms.
With the struggling economy, the government wanted to ride on Samsung’s event. Samsung Electronics also wanted to make the event glorious as the president was attending.
We need to bring forces together to overcome the crisis. The semiconductor crisis is not entirely due to Japan’s export restriction in retaliation for the Korean Supreme Court’s ruling on forced labor during World War II. Korean politics, which lacked international sense and understanding of industrial fields and felt as if it needed a spectacle to please the public, played a part in the economic crisis.