Foreign films ruled the weekend’s box office, with “Spider-Man: Far From Home” ranking number one and “Aladdin” sliding to second place as of Sunday. [SONY PICTURES]

For the second week in a row, films from overseas have captured the hearts of local audiences and topped the weekend box office.

“Spider-Man: Far From Home” won the weekend by selling more than 1.3 million ticket sales through 1,708 screenings, according to Korean Film Council.

Disney’s live-action “Aladdin” placed second by attracting an estimated 624,000 moviegoers to 975 screens. The movie made history over the weekend, becoming Disney’s first live-action film and second film overall to top 10 million in ticket sales as of Sunday. The musical is also on the brink of surpassing the total ticket sales of “Frozen” (2014), which sold a little over 10.2 million tickets.

The popularity of “Aladdin” is especially impressive considering that the film did not have much buzz when it was first released. Although it topped the box office in its debut weekend, it was quickly overthrown the following week by director Bong Joon-ho’s “Parasite” after the film won the Palme d’Or at the 72nd Cannes Film Festival. However, word-of-mouth spread quickly and audiences jumped to see the film again and again. Theater chains have since hosted popular sing-along screenings and the musical has set records for 4DX screenings as well, selling nearly 900,000 ticket sales. “Frozen” set the previous 4DX record in 2014, selling 480,000 tickets. 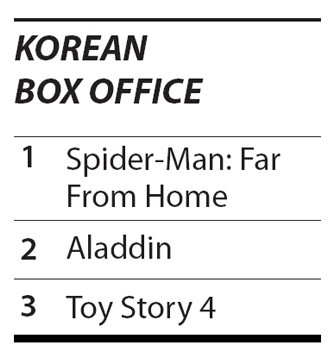 The third place slot was taken by “Toy Story 4,” which drew 240,000 moviegoers to 784 screens. Local fans who grew up with the series were delighted to see their favorite toy characters return to screen with new adventures.

Japanese animation film “Butt Detective The Movie” rounded out the top five by selling about 94,000 tickets to young theatergoers at 561 screenings across the country. One of the most popular children’s book series in Japan, the film adaptation showed its power to resonate with local audiences as well.

The story is about a Sherlock Homes-like, well-to-do detective whose head happens to be in the shape of a butt. In the film, the detective is on the search for a missing spice that was stolen from a client who is a curry restaurant owner getting ready to open a new eatery.