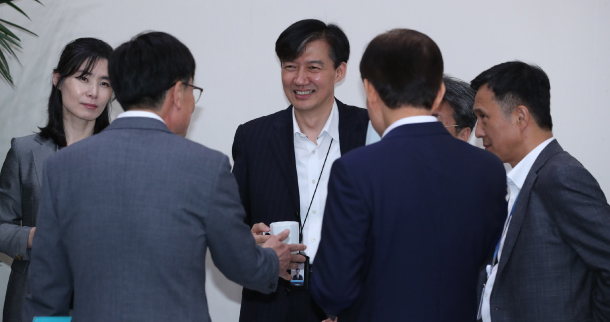 Cho Kuk, senior presidential secretary for civil affairs, speaks with officials ahead of a meeting at the Blue House on Monday. [JOINT PRESS CORPS]

A senior presidential aide faced criticism on Monday for posting a government press statement on Japan’s economic retaliation on his personal Facebook account before it was formally released.

The Ministry of Trade, Industry and Energy distributed a press release to its press corps at 5:27 p.m. on Saturday saying that Japan’s recent export restrictions will be discussed as an official agenda during the World Trade Organization (WTO) General Council meetings in Geneva on July 23 and 24. The ministry said the information can be reported immediately upon release as the highest decision-making body of the WTO will publicly address the issue.

The press release, however, was already made public. Cho Kuk, senior presidential secretary for civil affairs, posted the copy of the press release on his Facebook account at 5:13 p.m. on Friday.

The ministry was unaware of the situation at the time. “We learned later that Cho had posted the press release on Facebook before we released it to the reporters,” a ministry official told the JoongAng Ilbo on Monday. “It appeared that the press release was leaked while we sent it to the Blue House via email.”

“Important materials often receive Blue House confirmation before they are made public,” said a presidential aide. “The press release contained sensitive information so [Cho] should have handled this with care, but it seems he didn’t.”

“After the ministry and the Blue House policy office completed their coordination, Cho was briefed that the press release was to be released immediately,” a senior presidential aide told the JoongAng Ilbo. “He, then, posted the document on Facebook [before it was released to the media]. It was a simple mistake. He didn’t have an intention to leak.”

Cho also apologized for having caused the trouble. He, however, did not take down the post from his account. On Sunday, Cho also posted a song about the Donghak Peasant Revolution on Facebook. The revolution was led by peasants who sought to overthrow feudalism and foreign influences, particularly Japan.

Cho also quoted a Hankook Ilbo column on Facebook on Friday. “We must be enraged quietly toward the Abe administration’s shamelessness and dirtiness against the Korean government and the people, while using [our] rage to improve [our] abilities” and “promote a way to actually beat Japan beyond just slogans,” the posting said.

Cho is an active Facebook user and has freely expressed his opinions on various sensitive issues, including criticisms toward the main opposition Liberty Korea Party (LKP). He has also expressed his opinions directly and indirectly about the investigations and subsequent trials involving former President Park Geun-hye and her associates on charges of abuse of power and corruption.

“He makes as many as 20 posts a week,” said an LKP lawmaker. “Such social media activity during work hours is too much for even a rank-and-file public servant or a company worker.”