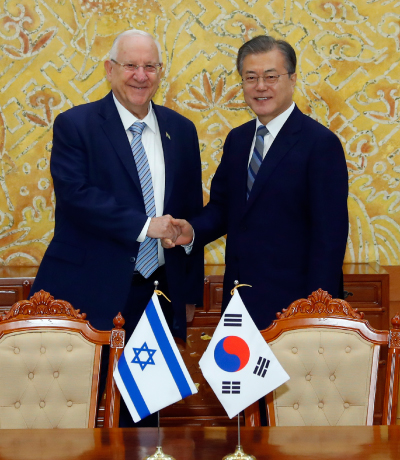 President Moon Jae-in and Israeli President Reuven Rivlin discussed an early signing of a free trade agreement (FTA) during their summit at the Blue House on Monday.

“The bilateral trade reached $2.7 billion last year, the highest it has ever been, and together through the Korea-Israel Industrial R&D Foundation established in 2001, we have made achievements in the high-tech industry including drones,” Moon said in his meeting with Rivlin at the Blue House Monday morning. “If the FTA is signed at an early stage, we expect bilateral trade, investment and exchange of services will expand by and large.”

The two countries began official negotiations for an FTA in 2016.

Rivlin suggested further cooperation between the two countries in the tech industry.

“We have more start-ups per capita than any other country in the world,” he said in the meeting with Moon. “Because of our unique start-up ecosystem, Israeli companies were able to achieve high levels of innovation in cybersecurity and national security areas, as well as in AI, automobile industry, smart city, water resources, agriculture and new and renewable energy sectors.”

“Bringing together Israel’s start-up companies with Korea’s leading companies that have achieved the Miracle of the Han River will be like a match made in heaven,” he added.

“The partnership between Israeli start-ups and Hyundai is just beginning,” he said in his meeting with Hyundai Motor’s executive vice chairman, Euisun Chung.

“Leaders in Korea and Israel are equally concerned about how best to protect their citizens,” Rivlin said. “The security threats are ever closer to our people. We have both increased our military capacity. And today we feel the need to have missiles that can intercede missiles aimed at our people.”

Joining the summit meeting were heads of national security bureaus of both countries, including Chung Eui-yong, director of the National Security Office of the Blue House, and Director- General of the Israel National Cyber Directorate Yigal Unna.

During the summit, the two countries also signed agreements on cooperation on tertiary education and in hydrogen economy.

Since Korea and Israel established diplomatic ties in 1962, two Israeli presidents have visited Korea. Shimon Peres did in 2010, followed by Rivlin this year. No Korean president has ever visited Israel.

Rivlin and his delegation are staying in Korea through Thursday.