Korea has to get along without Japan: Moon

Korea has to get along without Japan: Moon 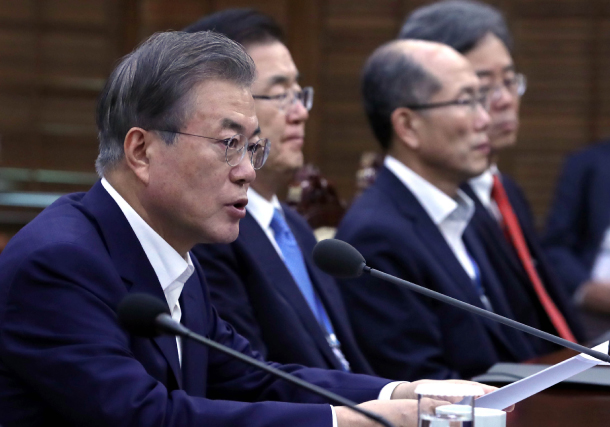 President Moon Jae-in on Monday declared that Korea will diversify its sources of industrial components and materials to end its reliance on Japan.

Moon condemned Japan over a snowballing trade row between Seoul and Tokyo at a senior secretariat meeting. Moon slammed Japan for imposing export restrictions on industrial inputs with the malicious intent of hindering Korea’s economic growth at a crucial moment - and warned that the campaign will never succeed.

Starting July 4, Japan’s Ministry of Economy, Trade and Industry imposed tighter restrictions on exports to Korea of three key materials used in chipmaking and other industrial processes. Last week, Japan warned of further measures, reaffirming its plan to remove Korea by July 24 from its so-called “white list” of countries entitled to fast export processing for strategic goods. If that happens, Korea’s automotive, appliance and electronics manufacturing could be affected.

“The latest export restrictions broke the framework of bilateral economic cooperation built over the past half century based on the ideas of interdependence and co-prosperity,” Moon said. “This is why we are sternly responding to the Japanese government’s export restrictions.”

It was Moon’s third public message addressing the crisis, and the most lengthy and elaborate.

Moon said the two countries’ economies are deeply intertwined and they have helped each other ever since normalization of diplomatic ties. “Manufacturing industries of the two countries, in particular, grew together within the order of an international division of labor, despite Korea’s enormous trade deficits [with Japan], as the entire process from component and material industries to the production of finished goods are closely linked,” he said.

Moon said Japan’s new restrictions had an indecent aim, and were not ordinary trade protection measures to defend its own industries. “We have to pay attention that the Japanese government’s measures began with restricting exports of key materials for the semiconductor industry, the core competitiveness of the Korean economy,” Moon said. “It is an attempt to halt our economic growth at a crucial moment, when Korea seeks to make a leap to the next level. If this was Japan’s intention, it will never succeed.”

Korean companies may suffer difficulties temporarily, but the country will overcome the crisis, as it had done in the past, Moon said. Japan will face a boomerang effect, he continued.

The government will overhaul an industrial structure that has long been heavily dependent on Japanese material and component supplies, Moon vowed.

“Japan will lose trust in the system of dividing labor in the manufacturing industry due to the export restrictions. Korean companies will diversify their suppliers by ending their reliance on Japanese components, materials and equipment or produce them locally,” he said. “I warn that the Japanese economy will end up suffering greater damages.”

“I want to point out that Japan’s unprecedented move to link the history issue with the economic issue is an extremely foolish act that goes against advancement of bilateral relations,” he said.

The two countries share a bitter history, including Japan’s 1910-45 colonial rule of Korea. Enslavement of Korean women in World War II brothels and conscription of forced laborers have been particularly thorny issues. While Korea has demanded compensation for individual victims, Japan insists that a 1965 bilateral pact settled the issues “completely and finally.”

Bilateral relations have deteriorated since Moon took office and scrapped an agreement to settle the issue of Japan’s wartime sexual enslavement of Korean women, signed in 2015 by his predecessor. The diplomatic chill worsened after the Supreme Court of Korea ruled last year that Japanese companies must pay compensation to individual Korean victims of wartime forced labor.

While Japan wants to address the forced labor issue through an arbitration panel, Korea made a proposal in June to compensate the victims through a settlement voluntarily funded by companies from the two countries. Tokyo immediately rejected that plan.

Moon said Korea wanted to talk about creating a reasonable plan that can be supported by the people of both countries and the victims, but Japan took unilateral measures without any diplomatic efforts. “Japan must recant the unilateral pressure [on Korea] and return to a diplomatic negotiation,” he said.

Moon also criticized Japan’s lack of justification for the measures.

Although Japan initially said they were in response to the Supreme Court rulings, he said, it later changed its position and suggested the measures were in response to Korea’s poor management of strategic goods and possible violation of sanctions against North Korea.

It changed its argument because it failed to win the international community’s support for starting a trade dispute in retaliation for civil suits between individuals and companies, Moon said.

“If Japan actually had such suspicions [about mismanagement of strategic goods trades and sanctions violations], it could have raised the issue with Korea first as a friend or to an international watchdog,” Moon said. “It didn’t say a word, but abruptly raised the suspicions. During the controversy, it was actually revealed that Japan had failed to manage its own trade of strategic goods.”

“I don’t think there is any need to continue this wasteful debate,” Moon said. “If Japan has no intention to recant its suspicions, it can accept our demand that the two countries will undergo inspections by an international authority to resolve any doubts.”

Moon also asked political parties to support the government and Korean companies to overcome the crisis.

“Our economy is in a serious crisis,” Hwang said.

“For the sake of the economy, country and the people, I agree with any type of meeting.”