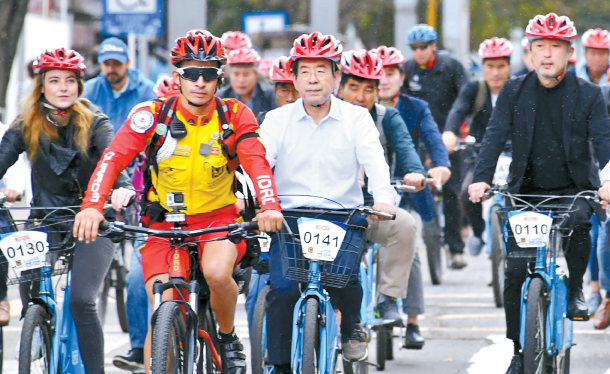 Seoul Mayor Park Won-soon, center, rides bike No. 0141 on a road in Bogota, Colombia, on Sunday, that has been blocked off from traffic for ciclovia, a local practice in some South American cities to designate certain roads to be car-free and used by cyclists and pedestrians only. [SEOUL METROPOLITAN GOVERNMENT]

Seoul Mayor Park Won-soon announced on Sunday his vision to turn Seoul into a bicycle-friendly city, including installing elevated bike roads above bus lanes in Seoul, during his visit to Bogota, Colombia.

“My intention is to turn Seoul into one of the most bicycle-friendly cities in the world,” Park told Korean reporters in Colombia’s capital on Sunday, during his trip to several South American cities to bridge inter-city cooperation on urban regeneration.

“And there are a few options to go about this plan. One is to take some of the car lanes and turn them into bike highways while making sure that they are completely separated from car roads.”

“Another option,” he continued, “is to build elevated bike roads above bus lanes, or to build enclosed bike lanes on either side of bridges across the Han River.”

Park is traveling through South American cities, including Mexico City, and Medellin and Bogota, both Colombia, from July 8 to 17 to explore inter-city cooperation on urban regeneration.

He made the announcement during a day of ciclovia, which is a local practice in some South American cities such as Bogota and Medellin that involves blocking certain roads from traffic and opening it up to pedestrians and cyclists on Sundays or other designated days.

“In all the options that the city government is considering, it is trying to build a so-called Cycle Rapid Transportation highway, an unprecedented attempt,” the Seoul city government said in a statement on Sunday. “The bike highway would be completely separate from roads used by cars and by pedestrians.”

The Seoul Metropolitan Government said it will inject 300 million won ($254,400) within this year to conduct feasibility studies on the plan.

“The plan is to finalize the details within the year and start executing them into next year,” Park said. “I think there should be visible results within the next two years.”

The Seoul city government said in its statement that there have been attempts to create elevated bike roads in other parts of the world, such as Bicycle Snake, a bike bridge built in Copenhagen in 2014, and the plan to build SkyCycle, an elevated bike road above London rail tracks.

The city government also designated five areas in the city to be bike-friendly areas, namely, Munjeong-dong and Wirye-dong in southern Seoul, Magok-dong and Hang-dong in western Seoul, and Gangil-dong in eastern Seoul.

“We will be building a total of 72 kilometers [45 miles] in bike roads in the areas,” it said. “And there will also be more bike rental stations for Seoul Bike near subway stations and office areas.”

Seoul Bike is a city government-provided bike-sharing service that began four years ago and has been used by 22.35 million people according to the city government.

As a pilot program from next year, the city government said it will also be installing 1,000 electric bikes in hilly and dilapidated areas of the city to assist the movement of elderly residents in the area.

“In any case, creating a bike-friendly environment goes hand in hand with combating fine dust pollution,” Park said during the press conference in Bogota on Sunday. “People are asking for concrete actions by the government. If all goes as planned, we may be able to help establish bicycles as a main mode of transportation in the city to create a cleaner and greener habitat for all.”

Seoul established a 2.6-kilometer bike road in Jongno area in central Seoul in April. At the time, the city also announced a plan to build and connect existing bike roads from central Seoul to Yeouido, western Seoul, and Gangnam District, southern Seoul. According to its survey of Seoul residents who commute on bikes, 61 percent said bike-only roads are the most needed policy for bikers in the city.